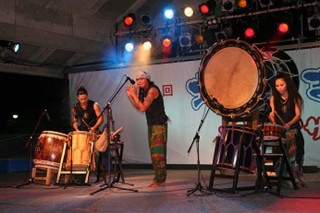 The line of performers at Kitanakagusuku is more diverse than at most local festivals.

Even as the holiday season approaches, the festivals season continues, with the 27th Kitanakagusuku Festival kicking off Saturday and Sunday at Shiosai Park.

The two-day festival runs 3 p.m. ~ 10 p.m., with fireworks extravaganzas capping the events both nights.  The festival is held each year as the villagers participatory festival.  This year, a Health Exhibition and a School Lunch Exhibition are being held in conjunction with the festival, which showcases the charm of Kitanakagusuku Village. 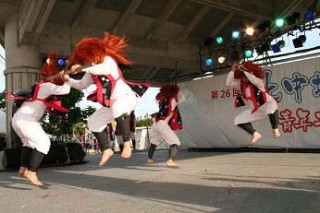 Kitanakagusuku residents’ groups stage most of the entertainment at their festival.

There will also be specialty sales booths at Kitanakagusuku Village both days.  To visit, from Camp Foster Legion Gate go straight on Route 81.  At Toguchi Intersection, turn south, which is to the right, onto Highway 329.  About 800 meters south from the intersection, look for the public housing buildings on the left, next to the ocean.  Shiosai Park is next to the housing.