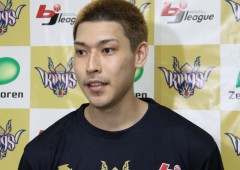 The youngest player on the Ryukyu Golden Kings, Morihisa Yamauchi, has been chosen Lawson “Ponta” MVP of the week for his action in the Basketball Japan League this past weekend.

He scored 10 points on the court in 20 minutes on Saturday against the Miyazaki Shining Suns, his contribution winning the game. On Sunday, he chalked up 30 points as his highest score in the league, playing 33 minutes court. Wearing jersey #32, his success has led to the Kings eight consecutive wins.

Yamauchi says “I’m really surprised that I got such a great award! I know this is because my teammates passed to me and gave me a chance to shoot a lot, and making it look like my success.”  He adds that “all team players let me move freely, and I believe this award is for us and not just for mine. I keep trying to be on a higher stage.