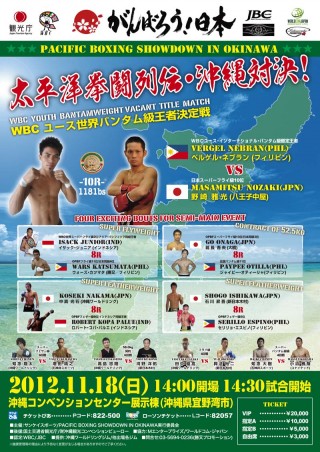 Eyes will be on the Okinawa Convention Center Sunday afternoon as the vacant World Boxing Council Youth World Bantamweight Championship is settled, and a series of bouts take place in the flyweight and featherweight divisions.

An undercard has three bouts, one featherweight, one 58 kilogram and one flyweight.  Yasuyuki Masuda of Japan meets Shota Chinen of Okinawa in a S. Featerweight six-round event, while Yousuke Kawano of Japan faces Tadamasa Takahashi of Okinawa in the 58kg class.  The Flyweight undercard has Yuji Okinori of Japan against Yukou Tanaka of Okinawa.

Peace, cooperation and prosperity are some of the most important values among the Pacific Rim countries, but recent events have caused organizers to recognize the importance of always having strong ties of friendship.  To improve mutual understanding and friendship within Pacific Rim countries, the Pacific Boxing Showdown was created.  Its first run was at Camp Zama on mainland Japan, the first time such an event took place inside a U.S. military base in Japan.