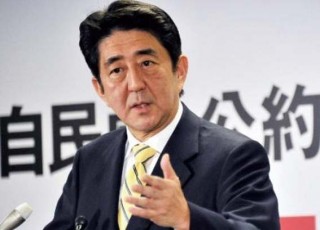 Despite of his strongly conservative campaign tune Shinzo Abe is expected to put fixing the economy first in his priority list.

Japan got a new Prime Minister yesterday, and Prime Minister Shinzo Abe is putting together a Cabinet that looks like old home week, with few outsiders and a number of close allies.

Abe, who was voted in as prime minister on Wednesday following his conservative Liberal Democratic Party’s (LDP) sweeping election win, has made clear his top priority is to slash deflation using heavy doses of spending cuts and easing of monetary controls.  The 58-year-old Abe has called on former Prime Minister Taro Aso to serve as his Finance Minister, and former trade minister Akira Amari to hold his “Economic Revival” portfolio.  Both are good friends and allies of Abe, who was the nation’s Prime Minister from 2006-2007.

The two are close allies who share Abe’s desire for reflationary policies, including heavy pressure on the Bank of Japan to take more drastic action to beat deflation.  The central bank has already delivered its third shot of monetary stimulus in four months and is sending Abe messages it could set a higher inflation target at its January meeting.

Brad Glosserman, executive director of the Honolulu-based Pacific Forum CSIS think tank, says “It’s déjà vu all over again.  Abe is a real Japanese economic traditionalist –inflate the economy to try to get growth but don’t try anything that will upset the proverbial apple cart.”

Abe is not expected to take on deregulation of sectors such as child-care, medical care, the labor market and agriculture, and participation in a U.S.-led trade pact. Vital reform of the creaking social welfare system is likely to be put off at least until after a July election for parliament’s upper house.

Yoriko Kawaguchi appears to be top pick for another stint as Abe’s foreign minister.

Some LDP members are saying the post should go to former financial services minister Toshimitsu Motegi or former LDP Secretary General Nobuteru Ishihara.  Motegi is also being considered for the post of economy, trade and industry minister or internal affairs and communications minister under the Abe Cabinet.

Yoshihide Suga is thought to be the next chief cabinet secretary, a key post combining the job of top government spokesman with being the Prime Minister’s coordiantor among ministries.  Abe, who’s known as a hawkish leader who wants to revamp the country’s pacifist constitution and rewrite Japan’s wartime history in a way that strips away much of the apologetic tone of current books, is eying other strong leaders, but is thought to be waiting until later to pick them.  Abe may put contentious issues that could upset China and South Korea on the backburner to concentrate on the economy.

“He’s not dumb. He has learned the obvious lesson that he has to pay attention to the economy first,” Glosserman said. “He can’t afford a crazy conservative jihad because he knows the public is not behind him.”  Abe is thought to be paying attention to criticism that his first administration was loaded with his buddies instead of with competent ministers, and is expected to pick rivals and some elders to season his lineup.

Some of those thought to soon be in Abe’s inner circle are LDP leader Sadakazu Tanigaki, 67, a softspoken fiscal conservative whom Abe replaced in September; Yoshimasa Hayashi, 51, a former defense minister and economic policy expert; and Nobuteru Ishihara, 55, a former LDP No. 2. Though political rivals to Abe, none of the three have reputations as proponents of bold structural reforms.