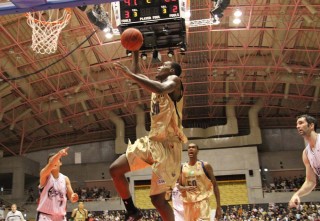 Unbeatable.  Unstoppable.  Incredible.  All are words being used to describe the Ryukyu Golden Kings, who’ve now gone 14 games in a row without a loss.

In fact, the Okinawa squad, already the reigning Basketball Japan League champions, haven’t lost a game this season on top of a run through the end of last year’s regular season and then the playoffs.  The latest victim was the Oita HeatDevils, a team that is so decimated it shouldn’t have even been on the hardwood last weekend.

Saturday’shellacking in front of Oita’s home fans, 100-68, was the indicator of what was happening to the bankrupt HeatDevils, which had none of its foreign players on the court during the weekend.  Making a bad scene worse, Okinawa was hot, shooting 62.7% from inside the three-point zone and haling in 10 of 24 3-pointers, scoring 59 points in the second half along, while snatching  59 rebounds compared with 25 by Oita. 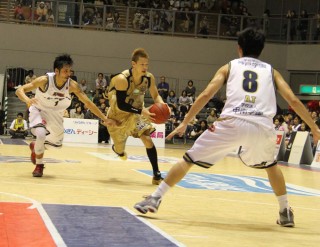 Naoto Kosuge scored the team high of 23 points for Golden Kings on Sunday.

As if it couldn’t be, Sunday was actually worse for Oita and its 1,286 fans.  The final score was 123 for Okinawa against 50 for Oita.    The team that had started the year riding high fell to 9-7 with Sunday’s loss.  Naoto Kosuge had the game high 23 points for the Golden Kings, going 7-for-14 from the 3-point zone.  Shigeyuki Kinjo poured in 20 while Anthony McHenry added 18, Terrance Woodbury 16, Jeff Newton 14 and Narito Namizato eight.

The HeatDevils suited up only eight players, all Japanese.  The four foreigners, who’ve not been paid in November or December, did not play.  The Oita team has filed bankruptcy and the BJL has taken over the team.  It already confirmed the foreign players will not be paid the money owed them.  At the time of the bankruptcy, the HeatDevils were in second place in the 10-team Western Division behind Okinawa.

It was a good weekend for the Rizing Fukuoka, as well.  The Rizing swept a pair from the Osaka Evessa, a time that’s struggled hard this year and has a miserable 1-11 record.  Fukuoka took the Saturday game 63-61, then had an easier time Sunday, winning 75-65 to boost their record to 10-6.  The Brave Warriors of Shinshu were equally happy, pulling off a pair of wins over the Iwate Big Bulls, 84-79 and a squeaker 80-79.  Iwate and Shinshu are both 11-5 in season play.

The Niigata Albirex BB split a series with the Northern Happinets.  The Albirex BB picked up a 72-66 win Saturday, then slipped 104-97  on Sunday.  The Happinets, who lead the Eastern Conference standings with a 10-4 record, joined Niigata in a 79-point blast in the fourth quarter.  The Albirex BB are now 10-6.  Tokyo’s Cinq Reves had an outstanding weekend, sweeping a pair from the Saitama Broncos, 89-87 and 97-88.  It was the Broncos’ second win of the year against 10 losses, while the expansion Tokyo squad improves to 7-9.

The Chiba Jets improved to a balanced 7-7 record with a pair of wins over the Sendai 89ers.  Sendai moves to a 5-9 record.  The Toyama Grouses shared the winners podium over the weekend with the Yokohama B-Corsairs.  The Yokohama team won an easy 92-59 matchup on Saturday, but bounced back to pull off an equally lopsided 91-70 win Sunday.  The Grouses are 10-8 now, while Yokohama’s 8-6.

The Hamamatsu Higashimikawa Phoenix had an easy Saturday, beating up on the Takamatsu Five Arrows 74-57, then turning around Sunday to do it again, 91-72.  The dual victories push the Phoenix to 11-7, while the Five Arrows slide to 4-10.  The Shiga Lakestars found themselves splitting a series of their own against the Shimane Susanoo Magic, capturing an 84-77 win Saturday, only to lose 87-67 on Sunday.  The Kyodo Hannaryz rode a hot shooting streak from Marcus Cousin’s 23 points, 20 rebounds to defeat the Miyazaki Shining Suns, 93-74.  Equally happy was their Sunday as they evened their record at 8-8 with an 87-67 win.  Miyazaki remains in the cellar with a 2-14 record.