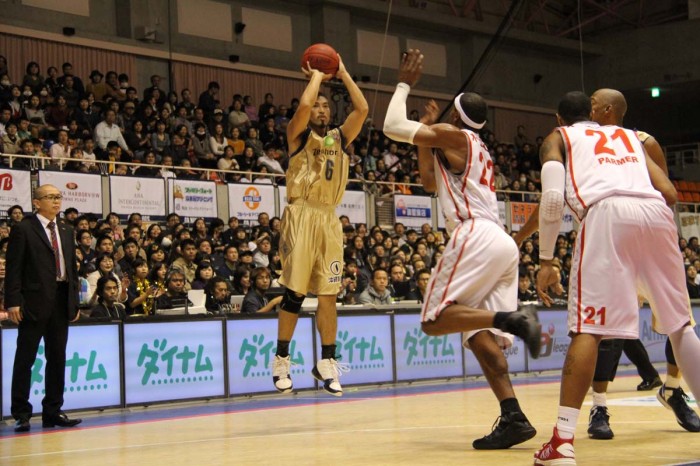 Shigeyuki Kinjo (6) was up to the challenge, scoring eight points including two three-pointers, in the first quarter on Sunday.

The Ryukyu Golden Kings were on a three-game losing streak when the Hamamatsu Higashimikawa Phoenix came to town, and there was no way the Okinawa squad was going to surrender on their home court to their number one nemesis.

The Golden Kings punched and pummeled their now-Western Conference foe on Saturday, grinding out an 82-75 win over their division challenger and a team they’ve both won and lost against in league championship series..  Anthony McHenry, who’d been on the bench the week before when Shimane pounded the Golden Kings, roared back to score 13 points and pick up nine rebounds, five steals, three assists and three blocks.

Naoto Kosuge and Morihisa Yamauchi each had 11 points in the victory, during which Okinawa forced the Phoenix to turn over the ball 26 times.  The second half was virtually all Golden Kings, as they scored 33 3rd quarter points compared with 12 for the Phoenix, and stayed firm in the fourth quarter.

Angry and stung by Saturday, the Phoenix charged into action Sunday, but Okinawa’s Shigeyuki 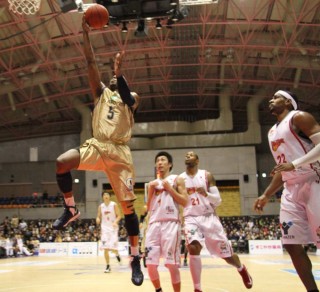 Kinjo was up to the challenge, scoring eight points including two three-pointers, in the first quarter.  Tied 24-24 at the end of the first quarter, the Golden Kings didn’t give an inch, holding their rivals to 16-for-45 on two-point shots.  Anthony McHenry was again up to the task, scoring 23 Okinawa points while adding six rebounds and three blocked shots.  Narito Namizato, who’s hailed as the game hero for his buzzer-beating three-point shot that won the game, had a total of 18 points and ten assists.  Naoto Kosuge added 11 points while Jeff Newton scored 10.

The wins put the Ryukyu Golden Kings alone in first place in the Western Conference with a 17-3 record, while the Phoenix fell to 15-9.

In the Eastern Conference, the Niigata Albirex BB climbed into first place with a Saturday win over the Gunma Crane Thunders, 93-56.  The pace was so smooth, the Albirex BB did more of the same damage on Sunday, upending the Crane Thunders 89-80 to extend their record to 15-6. The Crane Thunders dropped to 4-18.

The Yokohama B-Corsairs roared to their fifth and sixth consecutive victories over the weekend, including one in overtime against the Chiba Jets, to grab a 14-6 record.  Yokohama coach Reggie Geary was ecstatic with the 79-72 overtime win, which pushed Chiba down to 8-12.  The Shiga Lakestars took a pair from the Takamatsu Five Arrows, 86-58 and 91-53, to extend their record to 12-10.  The Five Arrows fell to 7-13.

Former Okinawa head coach Dai Oketaki had led the Ryukyu Golden Kings to a pair of Basketball Japan championship titles before he turned 35 years of age.  Last weekend he actually turned 35, and his Iwate Big Bulls gave him the perfect present, a 78-69 win over the Tokyo Cinq Reves.  The Cinq Reves had defeated the Big Bulls a day before, so Oketani was happy, especially since the win pushed his record to 14-6. Tokyo is now 8-12.

The Fukuoka Rizing swept a pair from the Miyazaki Shining Suns, pushing the Suns further into the cellar at 3-19.  The Rizing won 69-67 and 76-75, a  pair of nail-biters that didn’t seem expected of a team with low victory numbers.  The Rizing moved to 15-7.  The Shimane Susanoo Magic hammered the Oita HeatDevils 83-51 and 80-61 to extend its record to 15-7.  The HeatDevils are still trying to stay in contention at 9-13.

The weakest team in the BJL, and one that only a year ago was flying high at the top of the ratings, the Osaka Evessa, couldn’t find a bucket again last weekend, losing twice to the Kyoto Hannaryz.  Kyoto won 78-73 and 79-77 to stay on the positive side of the ratings at 12-10.  Osaka is now 2-16.  The Akita Northern Happinets found it fairly easy going against the Saitama Broncos, picking up 92-66 and 87-84 weekend winds.  Saitama is just a notch above Osaka in the cellar-dweller category, while the Northern Happinets are 13-7.