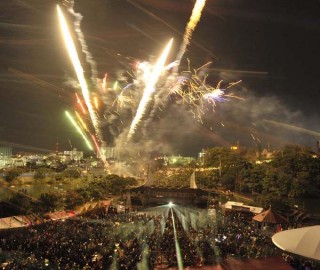 Fireworks and Okinawa’s biggest laser light show are included in the Christmas Fantasy event that takes place at Okinawa Dec. Kodomo-no Kuni from 21 through 27.

Okinawa Zoo Park is being transformed into a winter wonderland, complete with a laser light show.

Shimmering snow and vibrant colors abound beginning the 21st at the Okinawa City Zoo, as the 17th Christmas Fantasy opens its holiday season run.  The gates are open 4~ 9 p.m. each day through December 27th, and patrons can enjoy the zoo until 9:30 p.m. daily.

Snow, on Okinawa?  Organizers have more than four tons of snow to make a snow cottage found in traditional snow country.  The hands-on exhibits give children a chance to play with the snow.  Snow slides are part of the setting, and of course, opportunities to build a snowman.  A snow show will take place three times each day at 5:30 p.m., 7:15 p.m. and 8:40 p.m., and kids—and big kids, too—can make snowballs and even go sledding.

The laser light show is Okinawa’s biggest, and runs three times each evening at 6:15, 7:50. and 9:15 p.m.  Laser created special effects and fireworks, which include fire, snow and other variations, have been redesigned and tweaked for this year’s show.

Entertainment abounds at this year’s Christmas Fantasy.  Headlining the program is a 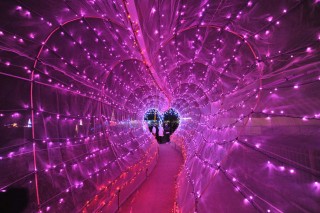 The “Tunnel of Love” is only one of the many illumination setups at the Christmas Fantasy event at Okinawa Kodomo-no Kuni.

Christmas Concert featuring Eisa-crew CROWN.  Other performers include K-Pop, Beat Jam, QT-Blue and T-da Family.  Amusement areas have been established for youngsters, and a big bingo game will provide extra fun for adults.  Prizes include stuffed animals, toys, bicycles, game software and a bunch more.  Performances are at 4:30 p.m. and 8:15 p.m.  Street performers doing dance routines are daily at 5 p.m. and 6:40 p.m.

Admission for adults and high school students is ¥1,700 in advance, ¥2,000 at the gate.  Children four through elementary school age get in for ¥1,000 advance tickets, or ¥1,200 at the gate.  Admission is free for those three and under.  Tickets are on sale at all Family Mart, Book Box, Co-Co and Lawson stores, Okinawa Zoo Park, Ryubo Palette Department Store, all Co-op stores, Ryubo Palette Department Store, Mitsukoshi Department Store, and Tsutaya Ginowan Branch.  A special MCCS package has buying one adult ticket and getting one free child’s ticket for a limited time, and tickets are also available at Kadena ITT.

Parking is available at the Okinawa Zoo Park, as well as at Okinawa City Office and Koza Sports Park.  A shuttle bus will operate between the outer parking lots and the Okinawa Zoo Park.  Those riding the bus on Naha-Kodomo-no-Kuni Ryukyu Bus Line 22 are entitled to a 35% discount on runs to and from Okinawa Zoo bus stop, and children below school age, traveling with a parent or guardian, ride free.