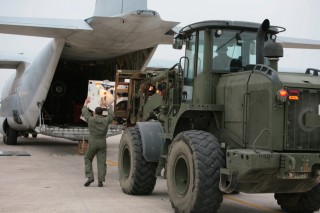 Marines load a KC-130J Hercules aircraft at MCAS Futenma bound for the Republic of the Philippines, Dec. 8, to assist in humanitarian assistance and disaster relief efforts in the wake of Typhoon Bopha. (U.S. Marine Corps photo by Lance Cpl. Matthew Manning)

Marines from Okinawa’s III Marine Expeditionary Force are once again in disaster relief mode, responding to Typhoon Bopha, which slammed the Philippines, killing more than 600.

At the request of the government of the Republic of the Philippines, Secretary of Defense Leon Panetta has directed U.S. Pacific Command to support humanitarian relief operations in the Philippines following Typhoon Bopha, which made landfall on Dec 4th.  III Marine Expeditionary Force, directed by U.S. Pacific Command, has sent personnel and equipment to transport humanitarian assistance and disaster relief supplies via KC-130J Hercules aircraft to affected locations within the Republic of the Philippines.

Two Marine Corps C-130s flew from Okinawa Saturday to get the effort under way.

VMGR-152 has flown a total of six flights and transported approximately 202,300 lbs. of relief supplies, including 14,500 family packs, 500 relief aid boxes and 40 generators.

Relief supplies were transported from MCAS Futenma to Villamor Air Base, close to the disaster area, where the supplies were given to displaced families affected by the typhoon and distributed by U.S. Department of Defense Overseas Humanitarian, Disaster, and Civic Aid (OHDACA). The U.S. military is providing air transport and other assistance in coordination with the Armed Forces of the Philippines through the OHDACA Program to support the relief effort led by the Government of the Philippines.

U.S. military personnel, to include members from III MEF already deployed to the Philippines conducting planning for Exercise Balikatan ’13, were directed to assist with the response effort. Balikatan is the largest annual U.S.-Philippine military exercise that focuses on humanitarian assistance and disaster relief operations.

The U.S. military is providing air transport and other assistance in coordination with the Armed Forces of the Philippines through the U.S. Department of Defense Overseas Humanitarian, Disaster, and Civic Aid (OHDACA) Program.

The purpose for U.S. support operations is to assist relief efforts led by the Government of the Philippines. Humanitarian assistance and disaster relief training is incorporated into nearly every major exercise conducted by III MEF. Recurring HA/DR training enhances operational readiness and develops joint interoperability during times of crises.

The Philippine government and military have led a tremendous effort to protect and help its citizens in response to this typhoon. The U.S. military has partnered and trained with the Philippine Forces for a number of years in humanitarian and disaster relief operations – including exercises such as Balikatan – which prepare our forces for the challenges associated with extreme circumstances.