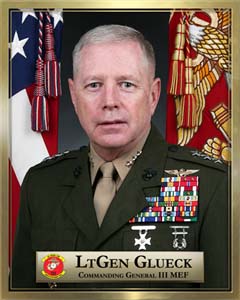 A Friday night alcohol-fueled off-base traffic accident involving one of his staff non-commissioned offer was the final straw in a rash of off-base incidents involving airmen, sailors and Marines in the country, causing the general to invoke a total ban on off-base drinking –or even possession of alcohol—by military personnel.  For the moment, the restriction does not apply to family members or civilian employees.

The single exception to the off-base drinking ruling is that service members may drink in their off-base quarters.  This does not apply to Navy personnel, however.  The admiral commanding Seventh Fleet banned drinking, even in quarters, between 10 p.m. and 8 a.m.

Glueck’s ruling is far-reaching.  The sale of alcohol on U.S. military bases and installations is prohibited from 10 p.m. ~ 8 a.m.  AAFES shoppettes will not sell alcohol during those nighttime hours, and all on-base clubs are now required to stop serving alcohol at 10 p.m.  The directive bans all alcohol sales, even to civilians.

The Air Force this week also imposed restrictions requiring all airmen to have a “wingman” when drinking.  That “wingman” must be an adult service member or SOFA-status person who isn’t drinking.  The mandate by Air Force Lt. Gen. Sam Angelella, commander of U.S. Forces Japan, is now negated by the ban on off-base drinking.  Angellella had given individual bases authorization to establish interim rules, but the Saturday announcements indicate he and Lt. Gen. Kenneth Glueck, the Okinawa Area Coordinator, are on track to bring to “zero” crimes and incidents by service personnel.

Angelella says the 11 p.m. ~ 5 a.m. curfew will remain in effect indefinitely.  He’s establishing a hotline for bar owners and other off-base businesses to call if they have American servicemen in their facilities in contravention of policies.

The incident that turned the military command to the new action involved a U.S. Marine, Staff Sergeant Nathan Sales, assigned to the Marines’ Camp Kinser in Urasoe City.  He’s charged with driving while slightly drunk on Friday evening.  Police say a vehicle Sales was driving rear-ended a passenger car halted at a traffic light in Kitanakagusuku Village near Camp Foster.

The with-injuries accident involved three cars.  A tip from a bystander brought police to the scene, where Sales was administered a blood-alcohol test.  Police say Sales’ level was double the limit.  The 35-year-old Sales denied first that he’d been drinking, but later admitted having drunk alcohol in his friend’s house. He is now admitting that he was under influence when the accident occurred.

The rape of a young Okinawa Girl in Okinawa City in the early hours of an October morning by two Navy sailors began the current spate of incidents.  That rape incident brought an 11 p.m. ~ 5 a.m. curfew, but still left GI’s with a large degree of freedom. That’s been followed in the past month by an airman getting drunk after curfew in a Yomitan bar, then going to the third floor of the building, going into an apartment and striking a teenage boy and damaging a television.

Days later, a sailor wandering around a Yokohama internet café naked drew an arrest, and then a U.S. Marine first lieutenant was busted in downtown Naha City after spending an evening after curfew drinking, then going to a fourth floor apartment, entering and going to sleep.  He was also arrested.  A driving while intoxicated Marine incident was also in the mix, as well as an apparently non-alcohol related incident where a young Marine was arrested trying to climb a drainpipe toward the roof of a building near Camp Courtney.  He told police he was going to the roof to practice doing back flips.