JAL forges alliance with the Colonel and KFC 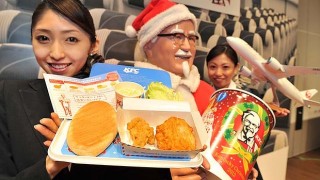 Colonel Sanders is now finding it very easy to pick up frequent flyer miles from Japan Airlines now that Kentucky Fried Chicken has agreed to being served on its flights in lieu of the more delicate flavors and textures of sushi.

Really!  The Colonel’s famous ‘finger-lickin’ good’ chicken’s being served on some Europe and U.S.-bound flights through February.  JAL, the national air carrier for Japan, has long been a great proponent of KFC and other chicken brands.

JAL says it will serve an Air Kentucky meal, which will consist of a chicken drumstick and a breast fillet, accompanied by bread, lettuce and a cup of the signature coleslaw.