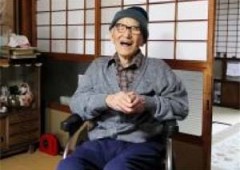 Jiroemon Kimura is the world’s oldest person at 115.

A Japanese mayor has hailed a resident of his city for becoming the world’s oldest person.

At 115 years old, Jiroemon Kimura inherited the title from an American woman who died Monday.  Yasushi Nakayama, the mayor of Kyotango, near Japan’s ancient capital of Kyoto, confirmed Kimura’s status Tuesday, calling him “the pride of our town.”

Kimura, born April 19, 1897, is 15 days younger than his predecessor, Dina Manfredini, who died in Iowa less than two weeks after inheriting the title as the world’s oldest living person.  Kimura, a former postal employee, has 14 grandchildren, 25 great-grandchildren and 13 great-great-grandchildren. He lives with his son’s family.