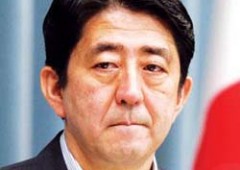 Liberal Democratic Party President Shinzo Abe has his eyes firmly on Prime Minister’s job as his party is poised to win a decisive victory in Sunday’s election.

The conservative Liberal Democratic Party is comfortably in the lead to win Sunday’s general election, with its main competitors, Nippon Ishin no Kai, the Japan Restoration Party, and the ruling Democratic Party of Japan, still trailing in second and third place.

A weekend poll by Kyodo news showed fully 21.1% the 1,240 respondents said they intend to vote for the LDP in the proportional representation section of the House of Representatives election, up 2.7 points from the previous poll a week ago. Support for Nippon Ishin, led by former Tokyo Gov. Shintaro Ishihara and founder Osaka Mayor Toru Hashimoto, stands at 10.6%, up 0.2 point from the previous poll.  Support for the ruling DPJ had meanwhile climbed to 10.3% up 1 point.

The incumbent Prime Minister and Democratic Party of Japan leader Yoshihiko Noda is fighting an uphill battle trying to keep his party in power.

Yoshihiko Noda or LDP chief Shinzo Abe — 39.2 of the respondents said Abe and 30.7 percent Noda, compared with 34.3% and 32.2% in the previous survey. Abe had narrowly led Noda in that regard in all three of the pre-election polls Kyodo has conducted since mid-November, but the gap widened to 8.5 points this time around.

Opposition force and LDP ally New Komeito fell to 4.1% percent support, down from 4.8% in the previous survey, followed by Your Party, which climbed to 3.9% from 2.9 percent.

Support for the Japanese Communist Party stood at 3.1 percent, unchanged from the previous poll, followed by the newly launched Nippon Mirai no To (Tomorrow Party of Japan) headed by Shiga Gov. Yukiko Kada at 2.3 percent, down from 3.5 percent, and the Social Democratic Party at 0.9 percent, up from 0.5 percent.  New Party Daichi and the New Renaissance Party won backing of 0.2% and 0.1%, compared to less than a tenth of a percentage point each in the last surveys.

The support rating for Noda’s Cabinet stood at 24.9%, down slightly from 26.8% in the previous poll.  In a separate survey by Jiji Press, 32.4% of voters think Japan should reduce its reliance on nuclear power to zero while 54.05 agreed it should be reduced, but not to zero. The poll, conducted over three days starting last Friday, also said 9.6% favor the continuation use of atomic power.

Among those favoring the zero option, 14.0 percent said they will vote for the DPJ.