Phoenix are HOT! Ryukyu Golden Kings are NOT! 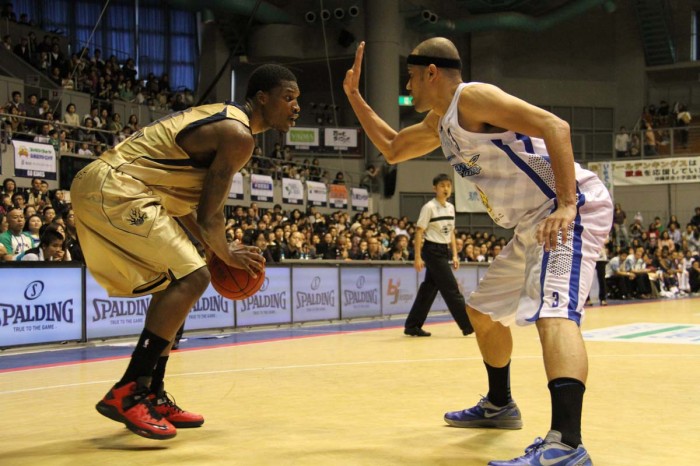 Kings’ Terrance Woodbury is trying to face down Susanoo Magic’s Machael Parker in Sunday’s game that the Kings lost 66-78.

After a red hot 15-game win streak to start the season, the Ryukyu Golden Kings can’t seem to buy a basket, even at JUSCO, but their new division rival, the Hamamatsu Higashimikawa Phoenix, are turning on the steam to pick up a seventh straight win.

Okinawa fans nearly went into cardiac arrest last weekend as the Susanoo Magic came to town and pounded out a pair of wins, 73-68 on Saturday and 78-66 on Sunday.  The sweep came on top of the season’s first loss a week ago at the hands of the Rizing Fukuoka.  The team’s this week licking its wounds and preparing for a tough weekend as they take on the Phoenix, who are nipping at their 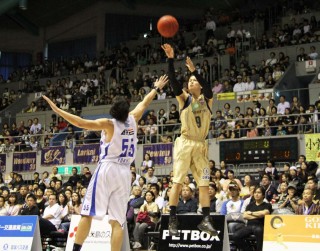 The Phoenix, who switched from the Eastern Division, where they’ve taken two league championships, to the Western Division, where the Golden Kings have done likewise and are reigning champions.  The mainland powerhouse has now ripped off five straight victories, including last weekend 82-72 win over the cellar-dwelling Osaka Evessa.  Hamamatsu is now 15-7, now in second place, and challenging Okinawa for Western Conference supremacy.

The Golden Kings found the Shimane 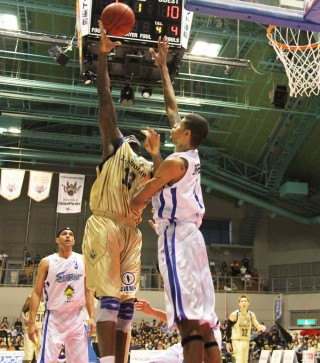 Susanoo Magic formidable, calling on their big guy, Jeral Davis, to grab 22 points and 12 rebounds Saturday, and then asked teammate Wendall White to score 24 to defeat Okinawa.  Terrance ‘Woodbury had 25 for Okinawa on Saturday, while Dzaaflo Larkai scored 16 and had 12 rebounds, but it wasn’t enough.  The Golden Kings found it tough going without sparkplug Anthony McHenry, who was sidelined with an injury.

Elsewhere, the Gunma Crane Thunders finally did it; they took an 82-73 win from the visiting Tokyo Cinq Reves to achieve its first regular season home game victory.  To make it more enjoyable for the home fans, they did it again Sunday, completing the sweep with a squeaky 84-83 win.  Gunma’s now 4-26, while Tokyo is 7-11.  Fukuoka Rizing, the team that destroyed Okinawa’s undefeated season, continued its winning ways with a sweep of the Oita HeatDevils.  Saturday was a near rout en route to a 101-73 win, and Sunday was worse as the Rizing claimed a 104-59 win.  Rizing Fukuoka is now flying high at 13-7, while Oita drops to 9-11.

The Takamatsu Five Arrows found winning an easy thing on Saturday, upending the Miyazaki Shining Suns 102-84.  That didn’t please the 3-17 Shining Suns, who battled back Sunday to take an 84-82 victory.  Takamatsu is now 7-11 on the year.