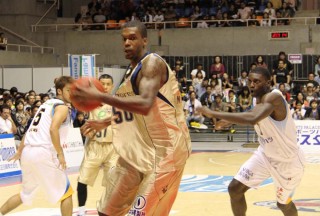 So close, but yet so far.  Only one game away from setting another Basketball Japan League record, the Ryukyu Golden Kings fell victim on the road to a Rizing Fukuoka squad that they had beaten only a day earlier.

The Golden Kings pounded Rizing Fukuoka Saturday to win a 15th straight game this season, 97-79, and were riding high with plans to set the new league record Sunday afternoon.  It wasn’t to be, as Rizing was waiting on the court for the reigning league champions, and proceeded to show Okinawa a dismal afternoon.  Rizing was hot, and Okinawa was not.  It was that simple!  Fukuoka took control and didn’t let the Golden Kings play their game, leading 35-32 at the half.

Okinawa couldn’t find the bucket from inside or outside, from two-point land or three, shooting only 4-for-23 in 3-pointers.  Adding insult to injury, Jeff Newton struggled on Sunday after injuring his leg a day earlier.  Final score:  Fukuoka 85, Golden Kings 74.

Head coach Kohto Tohyama says the match results “make me and the Kings regret a lot, but we’ve a long season and we cannot lower our eye.  We will play our next game as our best, having learned from this experience.”  The Golden Kings lick their wounds at home this weekend, taking on the Shimane Susanoo Magic.

For inquiring minds, the only two teams to match Okinawa’s 15-game win streak are the Niigata Albirex BB, who did it in 2005-2006 season, and the Hamamatsu Higashimikawa Phoenix, who recorded the feat in 2010-2011.

The Iwate Big Bulls, meanwhile, kept the pressure on the Saitama Broncos, routing them 111-94 and 88-72 as they improved to 13-5.  The Broncos, meanwhile, sank to 2-16, tied for the worst record in the 21-team league.  Iwate had been on a three-game losing streak.

The Chiba Jets split a series with the other cellar-dwellers, the Gunma Crane Thunders.  Chiba won the first match 78-71, then found themselves staring at the Sunday scoreboard in disbelief as they lost 81-66 to a team that to that point had only one victory.  The Yokohama B-Corsairs took two in a row from the Akita Northern Happinets, 87-74 and 89-56.  The losses dropped the Happinets to 10-6.  Akita began the weekend in first place in the Eastern Conference, and ended the weekend in fourth.

The Shiga Lakestars ended the Kyoto Hannaryz’s eight-game win streak Saturday, 69-67, but the Hannaryz won the Sunday nip-and-tuck contest 73-70, leaving both teams even with 9-9 records.  The Shinshu Brave Warriors fell to the Toyama Grouses 85-80 in their first meeting, then bounced back in double overtime to take a 99-91 Sunday afternoon victory.  The Osaka Evessa fell to the Shimane Susanoo Magic Saturday, 86-78, but turned around Sunday and won its second game of the year against 12 losses with a 78-70 win.  Shimane is now 11-7.

The Takamatsu Five Arrows swept a pair from the Oita HeatDevils, 81-65 and 82-55 to improve to 6-10.  The HeatDevils are now 9-9.  The Hamamatsu Higashimikawa battled past the host Miyazaki Shining Suns, taking a pair of wins from of two cellar-occupants as they improved to 13-7.  Miyazaki is now 2-16.