Tourism to rebound and break records in ‘13 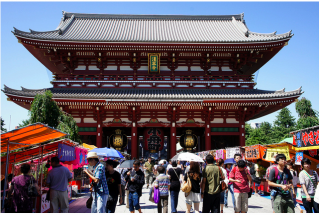 Popular sightseeing spots like Asakusa temple in Tokyo are expected to see record number of visitors in 2013.

A record number of visitors are expected in Japan next year, as the nation’s tourism programs recover from the earthquake, tsunami and nuclear disasters of March 2011.

A major travel agency, JTB Corp., predicts tourism will climb 7.9% in 2013 to 8.9 million visitors, breaking the 2010 record 8.61 million visitors.  The only questionable travel visitor category is China, which has been in decline since China and Japan have begun diplomatic tensions over the Senkaku Islands dispute.  JTB predicts, however, that the loss of Chinese visitors will be offset by an increase in Taiwanese and Southeast Asian tourists.

The travel agency also predicts that the number of Japanese traveling abroad will increase an easy 1.5% next year, to 18.7 million travelers.  If that materializes, it would reset the record for a second consecutive year.  This year’s protected number of Japanese traveling abroad is 18.43 million, a number that would break the previous record set in 2000.

The strong yen is aiding travel, tourism officials say, adding that the rapid growth of budget airlines is also a key factor in people wanting to go abroad.  In addition, JTB says visits to the Tokyo area will likely grown next year as Tokyo Disneyland marks its 30th anniversary.