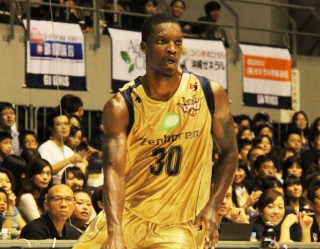 The red hot Ryukyu Golden Kings are that way this month thanks to the 62.9% shooting record from the field by Terrance Woodbury, enough to net him the league’s November MVP title.

A graduate of the University of Georgia, Woodbury racked up 108 points in six games to lead the Golden Kings with an average 21.3 points per game.

The Lawson Ponta Weekly MVP award this past week goes to a 25-year-old on the Sendai 89ers.  Sendai coach Bob Pierce says he’d been challenging Tayuya Komoda to be more assertive offensively, and “it’s paying off.”  Kumoda has consistently helped his team, shooting more than a dozen points per game average.