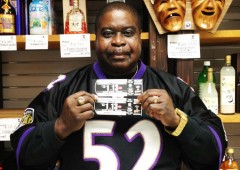 Frankie is originally from Baltimore, MD, but has called Okinawa home for the past 11 years. Now he says that there is a possibility that he could return to the U.S. sometime in 2015.

He says that his life on the island is just great in every aspect. “It’s safe, the weather is nice and so are the local people. What more can on want?” he says. And as long as he can get his weekly portion of taco rice, which is his favorite local dish, he says he’s good to go.