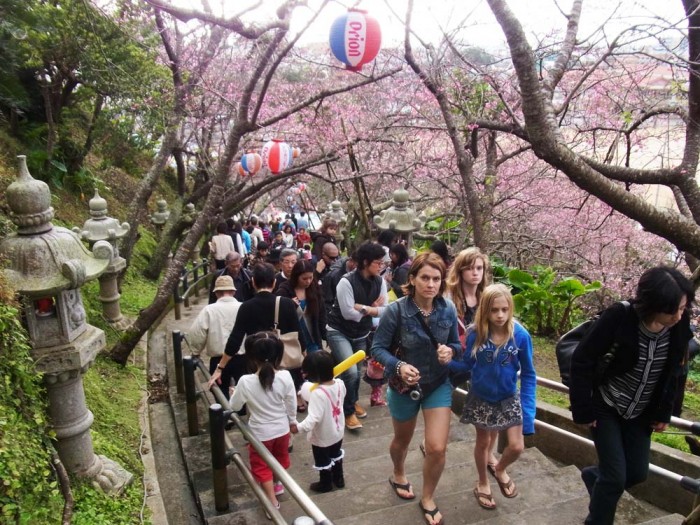 Visitors climb the stairs up Mt. Nangusuku under the canopy of pink cherry blossoms during Nago Cherry Blossom Festival.

The color pink is everywhere across northern Okinawa this week –and we’re not talking about the popular clothing apparel—as the annual cherry blossoms burst into bloom.

And blooming cherry blossoms is the signal for the ritual visits to the greater Nago City area in northern Okinawa one of the next two weeks for a close-up look at one of the island’s most famous flowers.  The festivities get underway both in Nakijin and Motobu this weekend, with Nago’s most famous festival beginning January 26th.

A group of children walk under the pink canopy of Mt. Yaedake.

admission free to Yaedake Forest of Sakura Park in Motobu Town, Kunigami County.  The flowers’ beauty is best seen the Mount Yae way with an altitude of 453 meters all dyed in pink Taiwan cherry blossoms.  The Motobu Yaedake Sakura Festival is the first of the year as the flowers bloom earliest here.  The festival involves a cherry tree exhibition, dance and drum performances, and the beauty of the flowers.

Festivities open Saturday, along with the Miss Sakura 2013 contest, a clown show, the Sakura story and a Japanese Taiko drum exhibition.  Motobu citizens make Sunday fun with a show from noon to 2 p.m., and an Okinawa noodles tasty eating contest from 5 ~ 5:30 p.m.  Additional activities continue the weekends of January 26th and February 2nd. 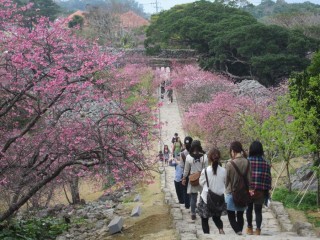 Visiting Nakijin Castle Cherry Blossom Festival is also chance to see the historical site of one of Okinawa’s most famous ancient castle ruins.

Not quite as established, but just as beautiful, the 6th Nakijin Sakura Festival kicks off Saturday on the ruins of Nakijin Castle.  The lighting of the cherry blossom trees is each evening, with last entries at 8:30 p.m.  Admission is ¥400 for adults, and ¥300 for all school age youngsters.

The ruins of Nakijin Castle were registered as a World Heritage site with eight other historical sites within the prefecture.  From the castle gate to the main enclosure, in the Nakijin ruins of a castle which residents are as proud of as the Shuri Castle in Naha, about 300 cherry trees stand in a single row.  The pink of the cherry trees look beautiful in the ramparts of the tasteful building blocks, the nocturnal view of cherry blossoms as lit, and the spectacle of the region.

Imajin drum performances take place from 6 p.m. Saturday, along with a Kakizome art exhibition by Tabashusui.  Kakizome is the first calligraphy writing of the New sYear, where auspicious words such as Kibou, meaning hope, and Haru, meaning spring, are painted on  Kakizome with a brush.  The Nakijin festival continues on stage Sunday afternoon beginning at 4:30 p.m.  with the Meio University brass band and an Eisa performance at 5 p.m.

The festival continues the weekends of January 26th with a set of dances and traditional entertainment, and the weekend of February 2nd with announcement of the king and queen of Hokuzan.

The biggest of the cherry blossom festivals comes a week from now, Saturday the 26th, with the 51st 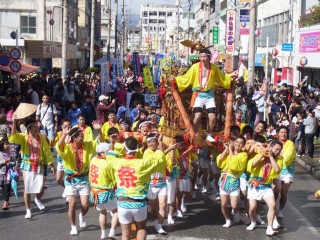 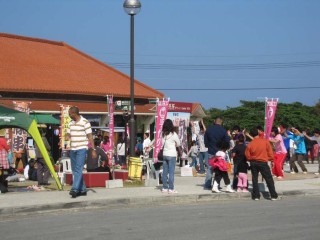 Nakijin Castle Ruins Park has a visitor center that sells food and souvenirs.

Nago Sakura Festival, which takes place throughout the day and evening at Nago Central Park, Sakura Park, Nago crossing street and Nago fishing port.  Opening ceremonies are at 11 a.m. at the entrance to Nago Castle, followed by brass bands.  At the nearby Transit Mall there are citizen participation events, including street dance, foods, amateur singing contests, Taiko drums, and an ice sculpture.

A costume parade gets things going at 1 p.m. Monday from Marudai, the Nago Museum.  The Transit Mall still has citizen events going on throughout the day, except during the parade. For the Okinawa newcomer, the Cherry Blossom Festival ranks as one of the most beautiful events of the year, with Mother Nature showing her colors with the traditional flowers.  This year’s “best viewing” is forecast through February 6th, although the cherry blossoms will be on the trees across Nago and nearby Mount Yaedake through late February.

In lesser numbers, cherry trees will soon be spreading their blossoms in areas to the south, including the capital city of Naha.

Festivities are held at the base of Nago castle, the expansive home to the local Aji chieftain in the 14th century.  The area is now Nago Central Park, where thousands of Taiwan cherry trees show their beauty early each year.  This year more than 20,000 pink Taiwan cherries are in full bloom.

Good walking shoes or sneakers are recommended for the trek up the well marked and paved roads and walkways to the top of the mountain, where there’s a spectacular view of not only the cherry blossoms, but of Nago and the brilliant shimmering waters of the East China Sea.  Be assured that you’re not alone.  The event draws tens of thousands of locals, as well as Okinawa visitors.

Pink strip up the hill follows the road to the top of Mt. Yaedake.

There is a folk legend about the cherry blossoms of Nago City, which tells why the cherry trees of Nago City are the first to bloom in the world and why they bloom so early.
Legend says that in ancient times there was a farmer who lived a very simple life with his wife and a small dog named Chintin.  This dog was a very loyal and good friend of this farmer, accompanying it’s master everywhere.   A very evil and nosey neighbor lived next to the farmer, always spying on everything that this farmer did. One day, while in the farmer’s yard, Chintin started digging and barking at his master, and the farmer looked at him and said “Oh you found something.”  The farmer got his shovel and started digging on the same spot until he struck something hard.  He put the shovel aside and began brushing away the dirt.  Suddenly gold started to appear, the farmer and his wife became very wealthy, and of course the neighbor was watching.

The next day the greedy neighbor went to Chintin’s master and asked  to borrow the dog.  The farmer happily let the neighbor borrow Chintin for a day, and the neighbor took Chintin into his yard and ordered him to find gold or he would beat him.  Chintin started sniffing around and soon started digging and barking.  The neighbor tied the dog to a nearby tree and began digging.  As the neighbor dug deep, a very bad smell and garbage started coming out of the hole, angering the neighbor, who then took the shovel and killed Chintin with the shovel.

When the farmer went to get Chintin back, the neighbor told him that he had killed the dog. The distraught farmer took Chintin’s body back to his yard, buried him and planted a pine tree on top of his little grave.  For many years they took good care of the pine tree until it grew tall.  Years later, the farmer’s wife asked her husband “remember how much Chintin liked the rice cakes?  Why don’t we cut down the pine tree and make a mortar to make rice cakes?”  They did, and when the mortar was finished and the wife began pounding the rice to make the cakes, gold started to come out of the mortar. The more she pounded, the more gold would come out.  Of course,  the neighbor was watching thru the window and later went to the farmer’s house and asked to borrow the mortar.  When the neighbor got to his house and showed his wife the mortar, he told her  it was magic.  They put rice inside and started pounding away, when suddenly a bad smell and garbage started coming out of the mortar.  The man got so mad that it threw the mortar into the kitchen fire and burned it.

The beauty is free.  All else takes yen to purchase.  As with all festivals, there are food and beverage vendors, game stands, and of course, souvenir shops and stands.

The Nago Cherry Blossom Festival is pretty much an all-day excursion, partly because of the walking, viewing, eating and listening to the music, but also because of the traffic.  We note that traffic is heavy, because you’re not the only one wanting to see the cherry blossoms.  From Naha Airport take the Okinawa Expressway, exit at Kyoda the last exit. Continue north toward Nago. Once in Nago, turn right onto Route 84 under the walkway. On your right you will see Orion Brewery. Turn left at the brewery and take an immediate right.

During cherry blossom season and on the days of the festival it is advised to park well away from the park both for cost and to allow for an easy escape when leaving.We recommend you park well away from the festival site, both for reasons of cost, but also the ease of getting away when it’s time to go home. There will be many parking areas with people trying to get your attention to park.  From the bases, plan on at least one hour travel time to get there.  Don’t forget to have the little ones make their pottie breaks before leaving home.

To visit Mount Yaedake, follow the same route, but instead of turning right at Nago Central Park, continue north another kilometer to Prefectural Road 84.  Turn left, then follow the English language signs to Mount Yaedake.

To visit Nakijin Castle, go through the Nago City Center, then turn left on Highway 84, heading west.  Shortly before Ocean Expo Park, turn right on Highway 449 and you’re two kilometers away.  The route is clearly marked.