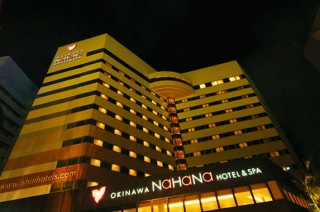 The Okinawa Nahana Hotel and Spa in central downtown Naha City is now being spun off to new owners by the Ishin Hotels Group, which says it can’t deal with the lodging unit any longer.

A new life debt collection company allied with Shinsei Bank, Shinsei Servicer Tokyo, which holds the land and building of the city resort hotel located in Naha’s Kume district, is advancing disposal negotiations for ownership rights with Starts Corporation, a middle-ranked real estate company.  Nahana Hotel has been operated by a foreign affiliated company, Ishin Hotels Group, but Starts Corporation has a hotel operating company in that group, so some observers think the operating core could be changed soon.

The disposal price is said to be about ¥2 billion.  The sale will have no effect on other hotels in Okinawa that are operated by Ishin Hotels Group.  Starts Corporation has been dealing with many businesses across Japan and overseas, including real estate, business, financing, consultancy, publication and hotel and leisure related businesses.  Starts has a staff of about 5,200, with assets and account settlements, as of March 2012, in the neighborhood of ¥117.7 billion, and a recurring profit of ¥10 billion.

A Starts Corporation subsidiary and hotel operating company, Starts Hotel Development, is already operating some hotels in Tokyo and adjacent prefectures, including Hotel Emion Tokyo Bay and Hotel Lumiere.  Okinawa Nahana Hotel and Spa was purchased by Ishin Hotels Group for about ¥3 billion in 2006. The group renovated the entire hotel and opened the 200 rooms hotel in July 2007.