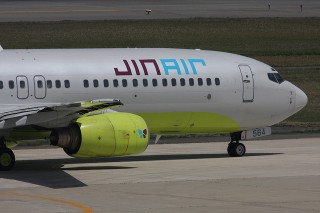 Korean Jin Air is the first low-cost foreign airline to have regular flights to Okinawa.

Initial flights have been full, with 73.8% of flight capacity being achieved on return flights to Korea’s capital.  Jin Air is flying modern Boeing 737-800 aircraft that carry 183 passengers.  It is operating a daily round-trip flight.  Normal fares will be ¥20,000, excluding fuel surcharges and taxes.

Okinawa Prefectural Government says the number of Korean tourists in 2011 was 26,000, an increase of 40% from a year earlier.  Jin Air now joins Asiana as the second Korean carrier to serve Naha. Asiana flies routes both to Busan and Seoul.