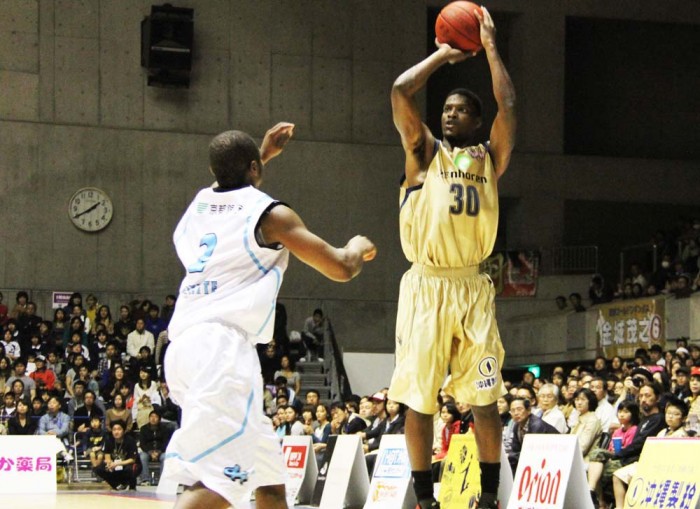 Terrance Woodbury (30) prepares to sink one more in Jan. 3 game against Kyoto Hannarytz.

The Ryukyu Golden Kings ushered in the new year the same way they said goodbye to 2012, kicking the butts of Basketball Japan League opponents and push their league leading record to 19-3.

The year’s first games were on the home court during the holiday called ”Osyogatsu” in Japan, sweeping a pair from the Kyoto Hannaryz while at the same time setting a new record for the highest number of fans at a Golden Kings home game.  That record January 2nd was 3,520 fans, a number almost matched a day later when 3,375 fans turned out to watch their home town heroes in action. 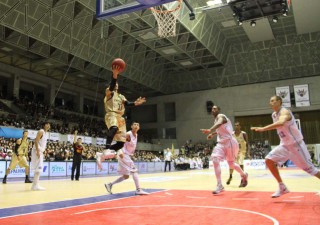 Narito Namizato scored 22 points in the first match, and followed with 23 in the second.

In the first contest, Okinawa pounded Kyoto 92-77, with Narito Namizato leading the scoring with 22 points and Terrance Woodbury close behind with 20.  Vanquishing foes is something Okinawa’s getting good at, going into the second game of the series with the intent of again hammering the Hannaryz.  They did, dumping the visitors 87-64 to push the record to 19-3.  Namizato was again the team leader with 23 points, going 9-for-16, while Georgia Tech alum Anthony McHenry dropped in 20 points while going 10-for-11 on two-pointers.

The home court victories made it four-in-a-row for the defending league champions and current Western Conference leader.  The losses drop Kyoto to an even 12-12 season record.

Elsewhere in the BJL, the Yokohama B-Corsairs were hot in their first game of the year, scoring a 75-74 win over the Niigata Albirex BB to run their win streak to nine games.  The win gave Yokohama a 17-6 record, dropping Niigata to 17-7.  A mere 24 hours later, the tables turned with the Albirex BB grabbing a 78-68 win over Yokohama, stopping their nine-game win streak. The Saitama Broncos found the win column Sunday, picking up a 72-68 win over the Sendai 89ers to snap a 12-game losing streak.  That win came a day after the 893rs defeated the Broncos 90-75.

The Chiba Jets picked up a pair of wins over the Shinshu Brave Warriors, grabbing the first game by ten, 88-78, and then a near rout with an 84-55 win.  The Brave Warriors now have six straight losses, but  worse, lost the services for the year of starting center Wayne Marshall, who ruptured his left patella tendon.  He’s told reporters he expects to be on the sidelines for six months.   The Shiga Lakestars outdistanced the Miyazaki Shining Suns twice over the weekend, 82-59 and 96-84, to take a 14-10 record.  Miyazaki drops to 3-21.

The Hamamatsu Higashimikawa Phoenix went into Beppu in Oita Prefecture, where they destroyed the Oita HeatDevils with a two-game sweep, the second a 77-58 win that pushed Oita to 9-15 with 11 straight losses.  The Phoenix are now 17-9, behind the Ryukyu Golden Kings in the Western Conference.