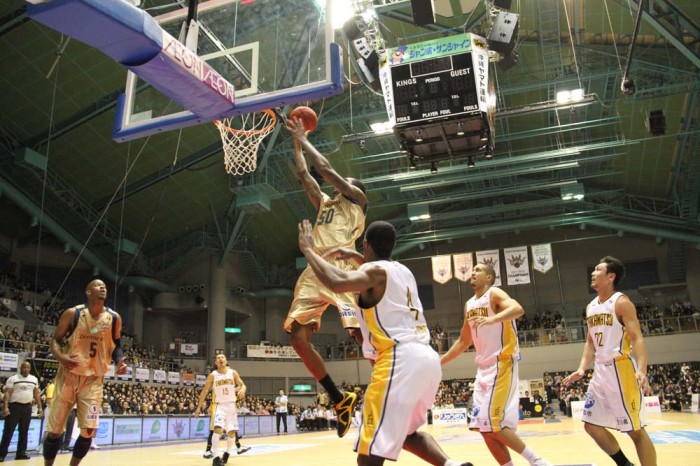 Jeff Newton tried his best, but nothing went right with the team’s performance on Sunday, although they won 77-50, Saturday.

The Ryukyu Golden Kings practically bounced onto the hardwoods of Ginowan to the cheers of adoring fans Saturday, and they didn’t disappoint them, pulling off a 77-50 win to push score a 20th victory in 23 games, outscoring the Takamatsu Five Arrows 22-7 in the second quarter.

Anthony McHenry led the pack with 21 points and nine rebounds, while Tsubasa Yonamine picked up 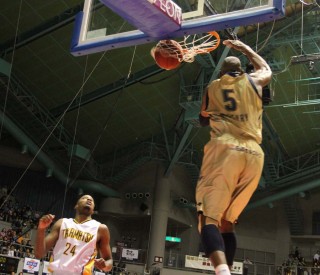 Anthony McHenry sinks one for the Kings on Sunday, but the effort was not enough.

13 and Jeff Newton pulled off a double-double with 11 points and 14 rebounds.  Still, it was a game well below the Golden Kings’ norm, with only 77 points. The weekend didn’t continue Okinawa’s way, though, as the 9-16 Five Arrows stunned Okinawa Sunday afternoon, taking the home team for an abysmal ride that ended with a 57-54 visitor victory.

Terrance Woodbury didn’t play, and the Kings’ best was a 15-15 tie after the first period.  The second quarter was a nightmare with a19-31 score, and recovery was nearly impossible.  Okinawa trailed still after three quarters, 39-42, and struggled the rest of the way en route to their fourth loss of the year.  That 57-54 score, incidentally, was the team’s worst of the year. 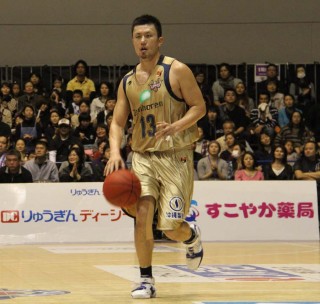 Guar Yosuke Sugawara is dribbling the ball towards Takamatsu Five Arrows’ end of the court as the Ryukyu Golden Kings ended up with their worst game of the season on Sunday.

Elsewhere, the Chiba Jets head into the All-Star break on a roll, hammering the Saitama Broncos 98-66 Sunday afternoon at home in Funabashi Arena.  A day earlier the Jets outdistanced the Broncos by a 90-67 margin.  The win moves the Broncos to the league’s worst record at 3-21, while the Jets evened their record at 12-12.  It was a mixed weekend for the Osaka Evessa, who pulled off a 79-64 win over the visiting Shiga Lakestars in the first of two matchups, only to get bumped 75-57 on Sunday.  Shiga’s now 15-11, while Osaka is 5-19.

The Iwate Big Bulls started the weekend on a winning note, downing the Toyama Grouses 91-79, only to find an irate Grouses squad taking them to task on Sunday, ultimately losing to Toyama 85-68.  The Grouses are now 16-10, while the Big Bulls are 19-7.  The SMiyazaki Shining Suns and the Shimane Susanoo Magic worked through a pair of games with each taking a win.  The Shining Suns went to overtime to defeat Susanoo Magic 91-90 on Saturday, only to get a drubbing, 99-69, on Sunday.  The Susanoo Magic is 17-9 on the year, while Miyazaki falls to 4-22.

The Yokohama B-Corsairs split their weekend series with the Gunma Crane Thunders, winning Sunday’s game 79-61 after a tight 77-74 loss on Saturday.  The Crane Thunders are now 5-12 and Yokohama’s 18-8.

The Tokyo Cinq Reves beat up on theAkita Northern Happinets 92-81 in the first of their week’s series, only to be on the receiving end of their own drubbing 92-73 a day later for a series split. Tokyo’s now 10-16, while the Happinets are 14-8.