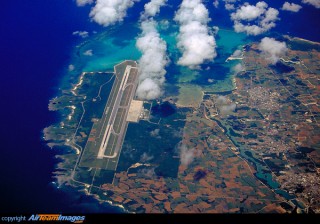 The old civilian airport on Shimoji Island off Miyako Island is getting a second lease on life, at least if the Japanese Air Self Defense Force has its way.

The airport, which currently is unused, has been utilized for pilot training by both JAL and ANA in the past, and was originally constructed as a possible landing site for intercontinental supersonic airliners.  It was completed in 1971, a year before Okinawa’s reversion to the Japanese. The supersonic airliners never took off, and the airport was used as a training base for Japan’s commercial airline pilots, although for some time the airport also served regular flights between Irabu Island and Naha.

With Chinese aircraft now intruding the Japanese airspace with regularity over the disputed Senkaku Islands, JASDF brass has put forward a request for funds to study the feasibility of using the Shimoji Airport as a base, from which the JASDF could dispatch its jets to scramble to the air space around the Senkakus whenever necessary.  “We have dispatched our fighter jets from Naha to Senkakus lately, but Naha is simply too far. It takes too long to get to the Senkaku area from Naha. Shimoji would be much closer and much more effective,” says Masanori Nishi, Director of Policy at the Self Defense Agency.

Not so fast, says Miyakojima City Mayor Toshihiko Shimoji, whose city Shimoji Island and its airport are part of. “I haven’t heard anything from the Self Defense Agency, even less regarding Shimoji Airport,” the mayor says. He is also pointing out that when the airport was originally constructed, then Ryukyu Governor Chobyo Yara signed a contract about constructing the Shimoji Airport that stipulates that the facility will be reserved exclusively for civilian use.