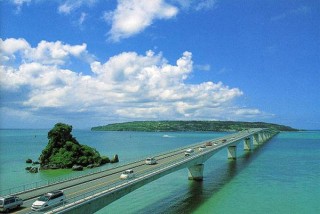 The race course is nothing short of spectacular as it crosses the longest bridge on Okinawa from Yagaji to Kouri Island.

Registration for the Kouri Island Magic Hour Run in Nakijin Village is now in its final week, and organizers are putting out the word that international contestants for the Half Marathon and the 10km Marathon are wanted.

The races take place Saturday, April 20th, beginning at 4 p.m. in the Nakijin Athletic Park.  The 21.0975km Half Marathon is to be run in three hours, while the 10km Marathon must be competed in 1 hour 28 minutes.  The ¥5,000 entry fee includes operating costs and accident insurance, and runners receive a cotton t-shirt, coupon ticket, certificate and medals for all runners who complete the marathon.

The course is set up with cooperation of the people of Kouri Island and Yagaji Island. The last half of the race will be a night race, so runners need to be prepared with their own lighting.