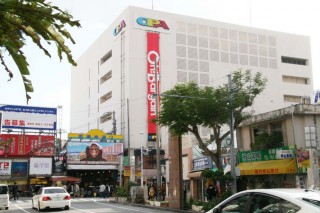 OPA Building has been one of Naha’s Kokusai Street landmarks, but is now scheduled to close in July, and re-open later as a Don Quixote discount store.

Naha OPA building is one of the landmarks on Kokusai Street in Naha City. It has long been a Mecca for fashion conscious shoppers, especially the younger ones, with its cluster of fashion outlets, trendy coffee shops, record store and a club or two. The OPA Building was originally conceived and operated as a part of Daiei department store chain. It has stayed open even if the Daiei department stores in Okinawa closed years ago.

However, the building operating company has just announced that the building and all tenant shops in it are going to close in July. The reason is a prolonged slump in business that has taken its toll.

Super market and department store chain Daiei developed OPA fashion business as a nationwide chain with OPA buildings throughout the nation in Osaka, Tokyo, Kobe, and other big cities.  In 1996 the former Festival Building was renovated and renamed Naha OPA Building, and at the peak of the business it housed 60 fashion shops .

The business was reportedly good until 2000 when it all started going down hill. Last year the sales were reported to be 90% down from its peak 10 years ago, and Daiei finally decided to close the facility. Long slump in business had continued  and customers stayed away.

Okinawa’s first Don Quixote just opened in Ginowan in November, and their second shop is scheduled to open in Uruma City. The company plans call for four Don Quixote outlets in Okinawa, and one of them is likely to be in the current OPA building in the heart of Naha.