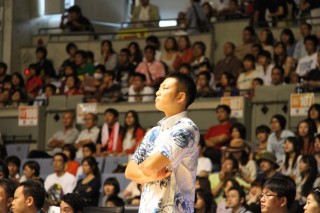 The Golden Kings Head Coach Kouto Tohyama guided the bj-League West team to the win of weekend’s All Star Game.

Okinawa’s first year head coach was the inspiration and guiding light, while Michael Parker delivered the on-court fireworks as the Western Conference took an easy 128-119 win over the east in the annual Basketball Japan League All-Star contest.

Playing at Ariake Colosseum Sunday night, the league’s seventh annual All-Star game was all Parker, who wound up with 29 points as he was named the All-Star Game MVP for a second time.  “It feels good” he said after shooting 12-for-15 from the field, including going 3-for-3 from three-point range.  He praised teammates Anthony McHenry of theRyukyo Golden Kings, Shimane’s Kazuya Hatano and Kyoto’s David Palmer.  “They know what I can do”, he said after the game, “and they knew where to get me the ball in my danger zones.:”

The West made 16 of 25 three-pointers, a nifty 64%, as the most awesome statistic of the night.  Kouto Tohyama, the Golden Kings’ coach, praised not only Parker, but Okinawa’s Narito Namizato, who added 14 points and seven assists.  Namizato and Parker worked as a team in the final minutes, with Namizato scoring nine points and racking up four assists in the final period.

“The players worked hard,” says Tohyama, “and aggressive play led the way.  I’m pleased with the result.”  The East had jumped to a 9-2 early lead, building to a 13-6 advantage in the first quarter before Tohyama’s boys roared back to cut the lead then turn to a 19-18 game late in the quarter.  Starting the second stanza 30-30, the West put pressure on, although they were trailing by a handful of points.

Next year’s All-Star Game will be played in Akita.