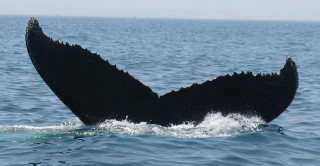 With the Zamami Village Whale Watching Association confirming the spotting of a humpback  whale about 5 km off north northwest of Zamami Island at noon on Dec. 29th.

The spotting sprung association members immediately into action with three ferries that they had had at standby, taking groups of tourists to see the whale that seems to be a young 10-meter-long male. As the tour boats came nearby the whale delighted the visitors by swimming around, diving and then blowing into the air as it surfaced offering the applauding tourists plenty of photo opportunities.

The whale watching season will continue through mid-April, according to Association Director Kiyoshi Miyagi.

“We are expecting so much to see the whale family that were here as a baby and mother last year. Whale families have a habit to come back to the same ocean year after year, and we are looking forward to see this mother whale and her offspring sometime this season,” Miyagi said.