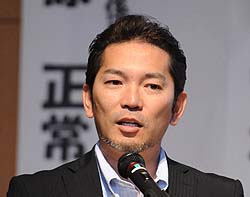 The three-term incumbent mayor of Urasoe City was turned out of office Sunday, to be replaced by a relative youngster who’s vowing to make changes on everything from the U.S. military in his city to free meals and day care for pre-school youngsters.

The 45-year-old challenger, Tetsuji Matsumoto, is the former president of a NPO company.  He polled 19,717 votes, while former Urasoe City Superintendent of Schools Hiromi Nishihara pulled 16,997 and Mayor Mitsuo Gima finished last with 15,501 votes.  Some 63.3% of Urasoe voters turned out for the election, a drop of 1.48 points from the last election.

Matsumoto had initially supported moving Naha Military Port to Urasoe City, but changed his mind after Naha’s mayor and the Liberal Democratic Party in Okinawa changed their position on returning the land without move.  He says it’s better the port not move, because Naha Mayor Takeshi Onaga had asked the government to return the military port land without moving it to Urasoe last month.

The new mayor also is opposed to the eastern coast second landfill project; the first phase is already done and there’s 39 hectares more to go.  Matsumoto says he wants it stopped.