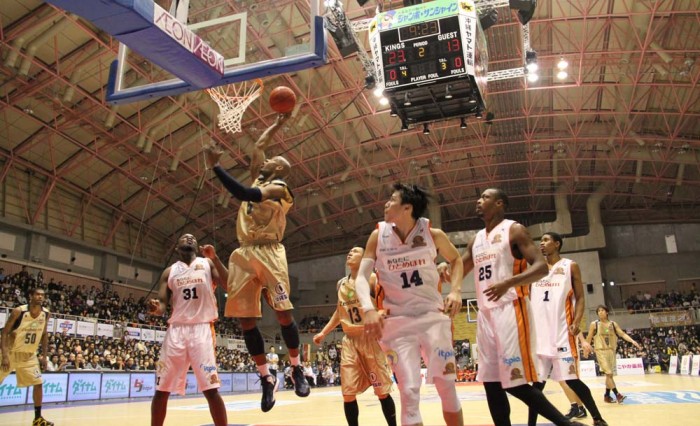 The powerful Ryukyu Golden Kings were no match for the Miyazaki Shining Suns, who were convincingly swept under the rug twice in two days at the Okinawa City Gym last weekend.

Okinawa rousted the Shining Suns 75-59 in the first match-upaki Shining Suns, who were convincingly swept under the rug twice in, with Naoto Kosuge scoring a team-high 15 points, while teammates Anthony McHenry and Terrence Woodbury each scored 13 and Jeff Newton added 10 plus 11 rebounds.  It got no better for the Shining Suns on Sunday, when the Golden Kings trounced the 4-28 Shining Suns 78-55 to boost their own record to 24-6, scoring their third and fourth consecutive victories. 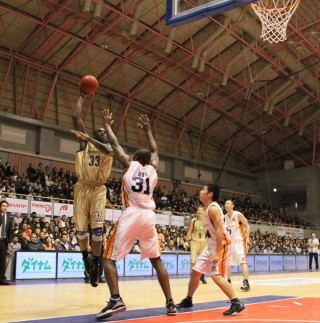 Dzaflo Larkai is ready to sink one as Miyazaki Shining Suns’ defense can only watch on.

points, Anthony McHenry 14, and Morihisa Yamauchi 12.  Big man Jeff Newton scored eight points and 12 rebounds.  Head coach Tohyama wasn’t pleased though, noting “we gave away too many rebounds, so we should fix it.”  Okinawa’s on the road for two weekends in mainland Japan now, returning home to Ginowan City Gym March 2nd and 3rd.

The Osaka Evessa are giving the league a run for its money, bouncing back from a dismal start to the season, but now on a win streak with new coach Bill Cartwright, who joined the Western Conference team in January.  Will it be enough to get the former powerhouse to the playoffs?  Nobody’s sure, but this is known: Osaka’s won four of its last six games with Cartwright in charge, including a 78-76 win over the Oita HeatDevils on Saturday, and a 92-80 victory on Sunday to push the record to 9-21.

The hot-shooting Niigata Albirex BB were on a tear last weekend, tallying 50% of their shots from inside three-point land and even better from the three-point zone with 52% going in, as they drummed the host Tokyo Cinq Reves 101-70 in a runaway Saturday.  Sunday was also in the Niigata column, but they had to work to maintain the win, a 65-63 contest, to escape with a two-game sweep.  Niigata, the Eastern Conference leader with a 24-8 record, has won 12 games on the road against four losses.  Tokyo is now 11-21.

The Akita Northern Happinets had to settle for a split with the Gunma Crane Thunders, winning on the road Saturday, 86-78, but losing to the host squad 72-66 on Sunday to run the win string to 17-13, while the Crane Thunders slipped to 7-25.  It was a happy weekend for the Toyama Grouses, who scored a pair of wins over the Sendai 89ers, 64-56 and 60-57, to push its record to 21-11 under first-year head coach Bob Nash.  Sendai slips to 11-19.  The Kyoto Hannaryz were equally successful in taking a two-game sweep from the Hamamatsu Higashimikawa, 83-72 and 74-72.  The Hannaryz are now 18-14, while the Phoenix are 21-13 but being challenged for second place in the Western Conference.

The Fukuoka Rizing split a pair with the Shiga Lakestars last weekend. The Lakestars took the first contest 82-74, but couldn’t keep the momentum in Fukuoka as the Rizing bounced back with a 75-65 win Sunday to extend its record to 20-12.  Shiga’s now 18-14.  The Susanoo Magic was strong over the weekend, hammering the Takamatsu Five Arrows 76-79 and 78-69 to extend its record to 21-11.  Takamatsu is now 12-20.

The Saitama Broncos lost the first game of its series against the Shinshu Brave Warriors in a Saturday squeaker, 98-97, but rallied Sunday to pick up a series split with a 100-92 win.  The Brave Warriors are now 15-17, while the lowly Broncos improve to 4-26.  The Chiba Jets outlasted the Iwate Big Bulls Sunday in a wild 22-for-40 free throw competition that cost the Big Bulls.  The Jets now stand at 17-12, while the Big Bulls are 21-10.