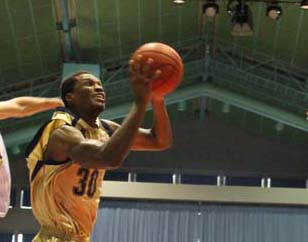 Terrance Woodbury fought heroically for Golden Kings scoring 14 point on Saturday and 18 in Sunday’s match, but that was not enough as Susanoo Magic won on both days.

A shocking 68-67 loss to the Susanoo Magic Saturday night in Matsue got the Ryukyu Golden Kings weekend off to a terrible start, and it didn’t get any better on Sunday.

Riding high on four consecutive victories, the league-leading Golden Kings weren’t anticipating a particularly difficult time, even though the Shimane squad was boasting a record nearly as good as their own.  The struggling Golden Kings found themselves tied 37-37 at halftime.

No matter though, as Susanoo Magic Center Jeral Davis ruined Okinawa’s night with ten points, nine rebounds and four blocked shots, while Terrance Woodbury and Dzaflo Larkai both scored 14 for the Golden Kings, while teammates Naoto Kosuge had nine, and Anthony McHenry and Narito Namizato eight points each.

Could it get worse?  Yep!  Sunday found the Susanoo Magic even hotter, with Michael Parker leading the home team’s parade with 20 points, ten rebounds, three steals and a block against Okinawa en route to a 70-54 shellacking of the Golden Kings.  Terrance Woodbury led the Golden Kings with 18 points, while Jeff Newton and Narito Namizato each had ten points.  The Golden Kings losses –five in the last nine games—brings their record to 24-8, while the Magic stay tough at 23-11.

The Hamamatsu Higashimikawa Phoenix are riding high as they try to recapture their brilliance of a season ago, sweeping the Osaka Evessa.  The victories in Osaka pushed the Phoenix to a 23-13 record in the hotly contested Western Conference being led by Okinawa.  The Phoenix captured the first game 90-77 and then squeezed out an 87-83 win on Sunday.  Osaka, with its new coach, former Chicago Bulls bench boss Bill Cartwright, is now 9-23.

The Shiga Lakestars made it two-in-a-row against the Kyoto Hannaryz, taking 74-67 and 82-75 wins as they continue to press their record to 21-13.  Led by University of Wisconsin standout Ray Nixon, the Lakestars never trailed against the 18-16 Kyoto squad.  Fukuoka Rizing, meanwhile, scored a pair of wins of their own over the Oita HeatDevils, 90-71 Saturday and 94-82 Sunday to remain in contention for a league title with a record of 22-12 now.

The Iwate Big Bulls weren’t so fortunate, having to share the win column last weekend with the Niigata Albirex BB.  They won the first game 75-70 over the 24-9 Albirex, but fell 86-72 on Sunday to tip their own hot mark at 23-11.  Yokohama’s B-Corsairs scored a pair of victories over the Shinshu Brave Warriors, with Senegalese-born center Pape Fay Mour scoring a season-high 21 points to lead the 97-83 Saturday win, then sharing the spotlight with Draelon Burns, who popped in the winning 79-77 shot with one second remaining on Sunday.  The B-Corsairs are now 24-8, an Eastern Conference win-loss number equal to Okinawa’s record in the Western Conference.

The Miyazaki Shining Suns brought a moment of sunshine to the conference basement, where it’s 5-28 record abounds.  Miyazaki outlasted the Takamatsu Five Arrows, 83-81 to win Saturday, only to take a spanking at the Five Arrows’ hands Sunday, 84-61.