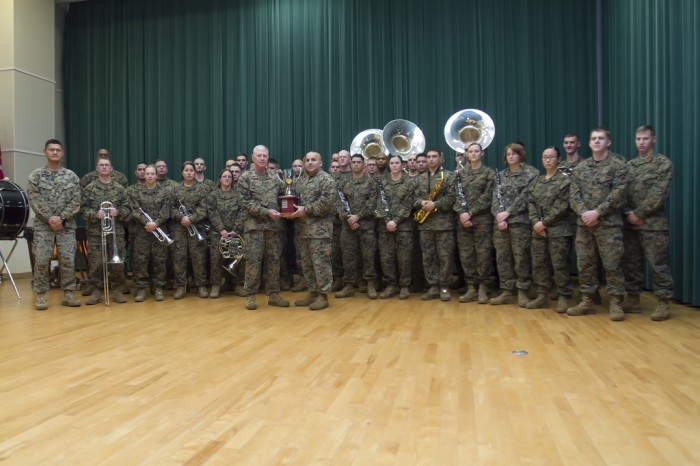 Bands throughout the Marine Corps compete for the prestigious award, which is given out annually by a panel of judges at Headquarters Marine Corps.

“We have recognized what a great capability and talent we have with the III MEF Band for so long,” said Glueck. “What is most exciting about this award is that the rest of the Marine Corps has finally recognized exactly how good the band really is.”

Earning an award as competitive as Field Band of the Year requires more than just natural musical talent; it takes a well-rounded group of Marines.

The recognition the band received is a result of its work ethic, training schedule and pride in its mission.

“We train hard, practice hard, and do the best we can,” said Staff Sgt. Austin R. Moore, training staff noncommissioned officer in charge and saxophone section leader. “If you always do your best, everything else will fall into place.”

The band has also been heavily involved in the local and regional community. It has performed in several countries in the region, including the Kingdom of Thailand, Guam and most recently the Republic of Korea.

“I was with the Republic of Korea Marine Corps commandant the last two days and he spoke very highly about the performance you gave in Korea, so your reputation is out there,” said Glueck while speaking to the III MEF Band. “You have a lot to live up to now, but I am confident that you will do well.”

After a brief period of rest during holiday leave, the band is back to work in preparation for another season packed with performances all over the region.

“The challenge is to be as good or better than the band of the year,” said Giove. “There is no finish line.”