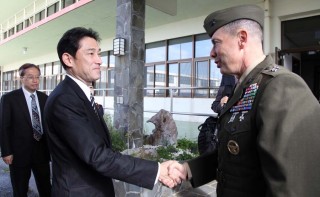 Fumio Kishida, the Minister of Foreign Affairs of the Government of Japan visited Marine Corps Installations and met with key leaders from the Marine Corps to include Maj. Gen. Peter J. Talleri, commanding general of Marine Corps Installations Pacific and acting Okinawa Area Coordinator.
Kishida visited Camp Schwab where he was given a tour of the base and taken to VIP Hill, an observation point. At the observation point, Kishida was greeted by Col. Jonathan D. Covington, deputy commander for MCIPAC and received a brief from Hirofumi Takeda, director general of Okinawa Defense Bureau on the Marine Corps Air Station Futenma Relocation Facility.
After the tour of Camp Schwab, Kishida traveled to Camp Foster and met with Talleri, Mr. Al Magleby, U.S. Consul General and other members of MCIPAC, U.S. Forces Japan Okinawa Area Field Office and MOFA. The purpose of the visit was to conduct a courtesy call with the acting Okinawa Area Coordinator and to tour Marine Corps Installations.  During the meeting Kishida said, “We would like to continue to work with, Lt. Gen. Glueck and Maj. Gen. Talleri as well as the other officers stationed in this region to deepen the cooperation between our two countries.”
After the meeting Kishida received a tour of Camp Foster. The tour included Kishaba Housing, the Industrial Corridor and West Futenma Housing. “It is extremely important to meet and I am thankful for your time and want to congratulate you on your appointment,” said Talleri. “We are honored to be hosted by the great country of Japan and very grateful to call this our second home.”
This is Kishida’s first visit to Okinawa after assuming his role as Minister for Foreign Affairs. Kishida was appointed in December, 2012 as part of Prime Minister Shinzo Abe’s second Cabinet which was formed on Dec. 26, 2012. “I would like to express our appreciation to all the military officers in Japan regarding their efforts to maintain peace and stability in the region,” said Kishida.