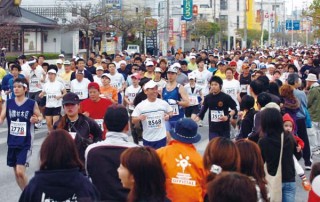 The “regulars” at the Okinawa Marathon were nowhere to be found Sunday, as winners and other top finishers were all new to the victory podium.

A total of 11,612 started the grueling 42.195 kilometer course through central Okinawa, with 73.85%, 8,576, finishing the race.  Officials say this year’s event marked the largest number of entries ever recorded for the Okinawa Marathon.  Of the total, 2,576 runners were women.