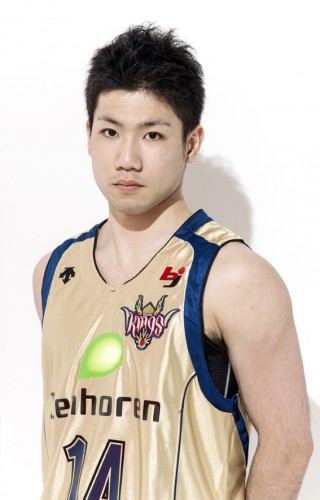 Ryuichi Kishimoto is the future hope of the Golden Kings.

Kishimoto says he looked down on the Kings while first watching, but saw his opinion change as his eyes were opened when Okinawa won the league championship in 2009.  Heading to college, he decided he would one day become a member of the home team, literally.  At Daitou Bunka University in Tokyo, where he won the award of the highest scoring player and most 3-point shots in the league of Kanto University Basketball, he began checking the Golden Kings scores every week.

Home to Okinawa on holidays from university, Kishimoto began working out with members of the Golden Kings, and established initial friendships.  Despite offers from other professional basketball and company sports teams, he was determined to join the Golden Kings.  He makes no bones about it: his decision to ‘come home’ was dictated by his opinion of the team, his hometown team, and the invitations from the Kings staff.

“I am happy and proud,” he says, “because I really wanted to join the Kings and was eager for a long time.”  Now, I’m a member with professional status and I take serious everything I do.”  He saw first action on the court in Okinawa’s losing efforts against the Shiga Lakestars, but he wasn’t disillusioned.

Teammates like him too.  One team member noted “Kishimoto is the player who can lead the team in the near future.” Another pointed out that although the “Kings already have great guard players, his ability is beyond that.  Even if we have enough guards, we should keep him for the future.”

Kishimoto’s place on the squad falls in line with the Golden Kings goal “Give a dream for Kids in Okinawa” program.  The hometown boy makes good, doing well here as a team, jumping to mainland Japan to improve skills, then finally making the dream real by coming home.