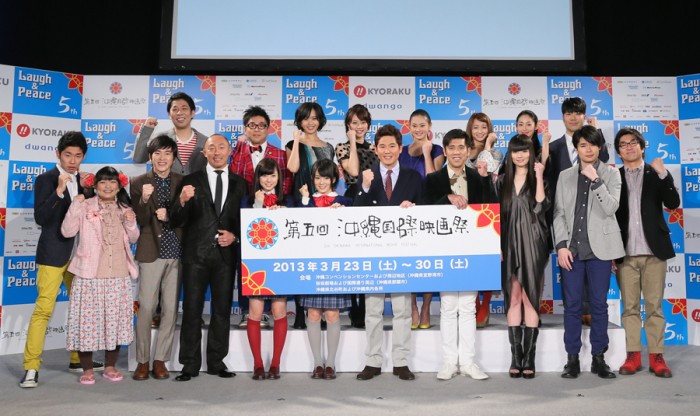 Organizers and participants to Okinawa International Movie Festival are ready for the kick-off of the event Saturday.

Theater lights are about to dim at three venues Saturday for the start to the 5th Okinawa International Movie Festival.

LOVE & PEACE is the main concept for this year’s festival.  Some movies are by special invitation, and others are entered in the competition. The main program collects films themed on the festival’s concept of “Laugh & Peace”, and again offers an extensive list of funny and peaceful films. The 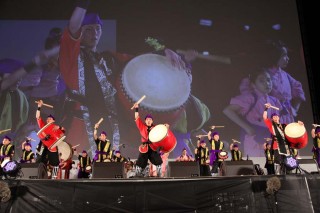 In this year’s event that promises be the biggest so far organizers have put a special emphasis on local Okinawan entertainment concentrated at the event stage at Ginowan Tropical Beach.

selection of films from all over the world aims to produce a happy encounter with the world of movies.

The mission of film festival is to properly view the tidal stream of the world’s film industry and introduce them to the home audience. With the evolution of digital technology and diversification of devices such as smart phones and tablets, video expression nowadays has moved beyond the boundary of just films.

OIMF(Okinawa International Movie Festival) has showcased not only films but unique features that seek different ways of expression.  Again OIMF will present the “Pachinko Movie Award 2013”. The unique video productions on Pachinko machines have been creating surprises as well-storied and nail-biting short movies.

The progress of digital technology has introduced video production to individuals. This made the festival’s decision to announce two new video competitions. “Creator’s Factory” will be developed as a rookie award style competition to discover the next generation’s creators and their talent. The three juries will be comedian and director Itsuji Itao, film director Kaze Shindo, and producer Kazuyoshi Okuyama, representing each genre to turn up new capabilities. 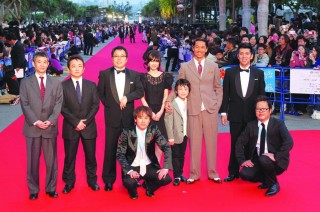 A red carpet event is a must at any film festival, and so it is in Okinawa.

The “Niibichi Movie Festival” is a collaboration project with FM Yomitan to introduce sideshow videos made for weddings in Okinawa. This festival may be joined by anyone who wishes to give enjoyment and happiness to many. OIMF promises many emotional-filled works by the Okinawan people, and The Okinawa International Movie Festival hopes to give back to the movie culture of Japan by showcasing distinctive movies and by discovering unique creators.

Again this year for the “Special Invitation” division, OIMF has selected charming films – a lineup overflowing with variety – sure to earn fervent support from movie fans. “Special Invitation” offers  many of yet Japan screened blockbusters and topic of interest movies from Hollywood films to Movie Festival related films. Not only comedy is included, but the festival will feature a strong lineup with a variety of unique films to enrich the festival.

Screened and well-received at the International Film Festival Rotterdam, “The Complex” is the first horror movie in six years by Hideo Nakata from “Ring”. In her way as a movie actress after graduating the idol group AKB48, Atsuko Maeda is the leading actress collecting the spotlight on her effortful performance.  Screened at the worlds largest inflatable movie screen “Open Air Screen” is the “Jack the Giant Slayer” by Brian Singer from “X-men” series. We here welcome you to the nail-biting great adventure.

④     Beasts of the Southern Wild

⑥     The Happy Life Of Debbie

The “Local Origination Project”, which combines the two axis of “Community-based Movies” and the “JIMOT CM COMPETITION”, is back with even more power for a third time this year. As the Okinawa International Movie Festival reaches the milestone of its fifth year this year, OIMF seeks a better and deeper relationship with the people of Okinawa. In order to further appeal to the rest of Japan and the world the charms of Okinawa, OIMF has greatly increased the number of co-productions by the people of Okinawa in both the “Community-based Movies” and “JIMOT CM COMPETITION” categories.

“Community-based Movies” involves the co-production with local residents of films which show off the information, lives, and legends of their regions, as well as regional industries, products and tourist information, in a way that is unique to their region.

This year, the area has been expanded even more, with co-productions already decided with the 6 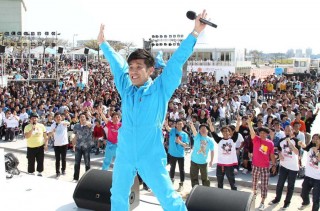 Okinawa’s own boy Gori is participating this year, too. 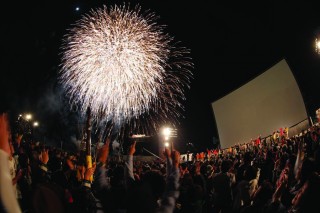 As with all grand events, fireworks end the festival.

regions of Japan and the 5 regions of Okinawa as well as Hong Kong, to create a total of 12 pieces of work with local residents, to share the charms of their particular regions. We hope you will enjoy this lineup which will be full of laughs, tears, and variety. In addition following their release at the Movie Festival, screenings of these films are planned for each region.

Individuals introducing these pieces will include Okinawan personality and member of Garage Sale, Gori, Rinken Teruya, lead of Rinken Band, nationally and internationally acclaimed director of “Hospitality” Koji Fukada, and Ken Horie of the movie “Veronica Decides to Die”. A number of featured directors will be in attendance.

The “JIMOT CM COMPETITION” is a “CM project” competition which seeks submissions from people living in various places, to “create CMs together” about “things that only local residents know, which they love about their home town and want to share with the rest of the country”. In addition to the usual “47 prefectures”, this year the “41 Okinawan Municipalities JIMOT CM COMPETITION” will create CMs for each of the 41 municipalities of Okinawa prefecture. Also, as “Special Categories”, there will be the “Yoshimoto Aozora Kagetsu” in conjunction with elementary schools in three disaster affected prefectures, and the “International Category” packed with the charms of various Asian countries.

Adding to the variety of the festival, the Special Screenings include a diverse election of short and full-length features from around the world.

At the second venue of the Sakurazaka Theater, using the theme of “Sakurazaka Film University,” celebrities will become lecturers, conducting feature screenings in which films can be learned about and enjoyed from a variety of aspects.

They will present a new way of enjoying films through such means as in-person audio commentary, talk events, and sometimes even inviting a guest lecturer who is well- versed in that particular film. This movie experience bursting with live elements cannot be found elsewhere, not even in other Okinawa International Film Festival events–it’s something you can only find at Sakurazaka Theater!

Takashi Fujii, knowledgeable not only in comedy, but also in film, music, and pop stars, will serve as the film university’s president.

Every year at a stage set up at Ginowan Tropical Beach, a comedy live stage, a musical live stage, and an Okinawan residents participation stage are held. This year, the Okinawan residents participation stage is being beefed up even more than in the past, with lots of plans for collaboration with Okinawa, including Okinawan tradition and culture. For the comedy stage, every day, lots of popular performers will be present. For the musical stage, there will be artists connected to Okinawa, as well as the appearance of popular idol groups!

Continuing from last year, the girls’ stage will power up and make an appearance at the Okinawa International Movie Festival! Until now, there have not been contents to enjoy for girls who are movie festival fans and fans of performers, but at this “Chura-ii GIRLS UP! Stage,” the goal is revitalization of Okinawa’s local areas.

This year, in addition to a fashion show with popular brands, unique Okinawan contents, a comedy stage show, and a musical show, there will be an event distinct from those before it, which girls can experience and relate to. It is sure to capture the attention of girls gathered from not only Okinawa, but Japan and Asia as well!  In addition, on March 30th, a fashion event known as “2013 SUPER G!RLS FESTA IN TAIPEI” will be held in Taiwan.

The“Chura-ii” Fashion Show with Popular Brands and Live Musical Concerts spotlights popular models and TV personalities such as Elli-Rose, Mary Sara, MAGGY, and Kozue Akimoto have gathered in Okinawa, and will be wearing fashion with the latest trends from this year’s spring and summer. Also, musical concerts will be held by notable artists, adding excitement to the venue!

Events happen in the Exhibition Building at the Okinawa Convention Center on Sunday the 24th through Saturday the 30th, noon to 7 p.m. weekdays and 10 a.m. to 7 p.m. weekends.  Last year in the “Contents Land”, there was a stage capable of holding 900 people, the booths by the exhibitors and sponsoring companies that attracted the visitors every day, and 100,000 people who visited during the festival. This year, the festivities have changed the name to “LAUGH & PEACE TOWN”. It is the “town to provide more fun along with the experiences” to the visitors.

At the stage, which is capable of holding 900 people, the events scheduled to be conducted include press conferences, introduction of the films, comedy shows and music shows – which are also planned to be delivered as live streaming.

The Okinawa Contents Bazaar provides the opportunities to have the contents and people connected to each other, and have them tap into Asia and the world through the entertainment. A wide range of entertainment contents and human resources gathered not only from Japan but also Asian countries and territories interact with each other and exchange information.

The Okinawa International Movie Festival will hold several ceremonies, including a Red Carpet, Opening Ceremony, Closing Ceremony, All Ending and the OIMF Party.

On Saturday the 23rd at the Okinawa Convention Center, international and domestic guests will walk the red carpet in a sumptuous ceremony which all can participate in, simply by joining. The Closing Ceremony takes places on Saturday March 30th. Here the prizes for the Laugh and Peace categories will be awarded, as well as the Golden Shisa Award for Best Film as decided by the Grand Jury.

A glamorous ‘All Ending’ event on the Beach Stage will then close the festival.

Okinawa International Movie Festival also holds parties everyday in order to thank everyone for their assistance, starting with a Welcome Party where we would like to invite guests to make new friendships, build new partnerships and mix with media, government, and film industry professionals.