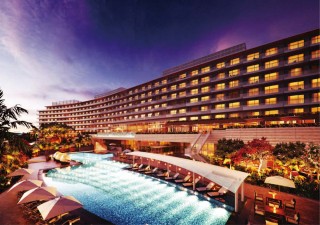 The new Hilton Hotel and Resort is now under construction and scheduled to be completed in 2014.

With every passing day, the west coastline of Chatan, behind Mihama American Village, is changing as a major reclamation project is redefining the central Okinawa town.

The heart of the transformation is a 140,000 square meter reclamation project to the north of American Village that’s destined to become an urban tourism style resort including rows of homes, brick sidewalks, beaches and decks, and the anchor tenant, a new Hilton hotel.  Construction on the Hilton hotel and resort began last November 8th, with a completion date expected early next year.

As one of the core development areas, there is the marine business promotion center, which is due to be opened this summer. The Chatan Fishermen’s Cooperative association manages this center, and a dining-room, marine leisure, on-site training, etc. will be arranged. In the future, the walking road, which amounts to 6.8 km in full length to Sunabe is due to pass along the Mihama area and the Fisherina area and to be improved from along the Araha beach park in the Hamby area.

Chatan Town is one of the leading forces of the Okinawa’s economy. Fisherina development 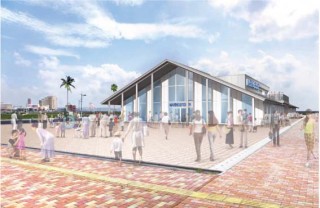 The Fisherina marine business promotion center is scheduled to open this summer.

project is beginning to move as a major project following Mihama American Village development project that has proven a huge success. The determination for Chatan to invite a Hilton Hotel became the trigger.

Although U.S. West Coast became the model of the American Village development project, it is Cairns in Australia that serves as a model of this Fisherina development project.  Characteristic of the beautification programmed for this area, all electric wires in the project area are being placed underground to protect against typhoons.  Ultimately, all electrical wiring in Chatan will be shifted underground.

As a public facility, not only tobacco but also public drinking will be banned to maintain an always clean and safe environment. It has already been a success example in Hawaii, and Chatan tackles it for the first time in Okinawa. Aiming development at the urban tourism type resort on the waterfront is uniting the fishing and marine industry, and is expected to bring increased prosperity to the community.

The merits of tourism access in Chatan Town, an easy drive from Okinawa International airport, are increased with the new Fisherina project.  This area also has the American Village and the Sunset beach, leading commercial establishments within the prefecture, and has a possibility of further developing as a base of the Okinawa sightseeing.

A huge fountain like in Las Vegas is being planned, and the night view of a beautiful city will be completed. When this Fisherina area itself has entertainment, tourists from inside and outside of the country are expected to flock to the area.