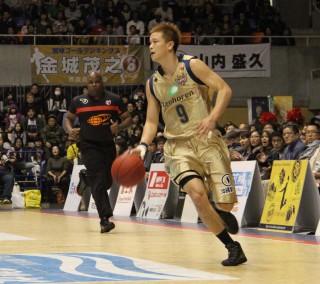 Viewing their five losses over a nine-game period as an anomaly, the Ryukyu Golden Kings ripped their closest competitor in the hotly contested Western Conference of the Basketball Japan league, first pulling out an 87-84 win on the road, then making it look even easier with a 78-69 victory in the second stanza Sunday.

After being thumped by the Shimane Susanoo Magic a week earlier, the Golden Kings beat up on the Hamamatsu Higashimikawa Phoenix in front of more than 2,500 Phoenix home court fans to extend their record to 26-8.  A 19-rebound game by center Jeff Newton set the tempo for Saturday, with the Golden Kings also getting 22 points from Terrance Woodbury, another 18 from Naoto Kosuge, who mixed five three-pointers in that, and 15 from Anthony McHenry.

Okinawa seemed even stronger Sunday, holding the Phoenix to only 34% shooting from the field as it picked up the second win.  Jeff Newton had 18 points along with eight rebounds and a pair of blocks, while Anthony McHenry and Terrance Woodbury each scored 15.

Elsewhere in the BJL, a hot shooting Saitama Broncos Guard, Yuki Kitamuki, dumped in eight-of-12 three-pointers to tally his game-best 30 points in an 89-84 win over the Sendai 89ers.  The win gave the Saitama Broncos a weekend sweep, having picked up the first series victory 97-87.  The Osama Evessa, meanwhile, ended a three-game skid with a win over the Kyoto Hannaryz Sunday. They’d lost the first game in the series 67-63, but bounced  back to pick up a 69-53 triumph.  Losing Kyoto coach Honoo Hamaguchi was disgusted, calling the game “the worst game of this season for us.”

In the first 24 games of the year, Osaka had won only five, and the head coach was sent packing.  New coach Bill Cartwright, formerly of the Chicago Bulls, has been in place ten games now, and has won five of them to bring his team’s record to 10-24.  Kyoto is now 19-17.

The Tokyo Cinq Reves and the Shinshu Brave Warriors split their series in Tokyo, losing the opening stanza 70-62, but rallying Sunday to pick up a 78-69 win.  The Niigata Albirex BB rolled over the Toyama Grouses 87-62 Saturday, but found Sunday a rough afternoon on the road.  The Grouses were victorious, 81-75, extending their record to 23-13, while Niigata holds at 25-10.

The Fukuoka Rizing outshined the Miyazaki Shining Suns 99-60 on Saturday, and kept the pressure on for a 77-63 win on Sunday. The Rizing improved to `13-5 at home and 24-12 overall.  The Shining Suns now have the dubious distinction of the league’s worst record, 5-31.

The Iwate Big Bulls were victorious over the Yokohama B-Corsairs as they extended their lead Saturday, winning 92-68.  The B-Corsairs weren’t happy, and roared back with a 75-62 win on Sunday.  The B-Corsairs are now 25-9, the top team in the Eastern Conference with a .735 win percentage.  The Big Bulls are 24-11.  The Shiga Lakestars outshined the Takamatsu Five Arrows 102-71 Saturday, but couldn’t hold back the 14-22 Five Arrows on Sunday, losing 93-80.  Shiga is now 22-14.