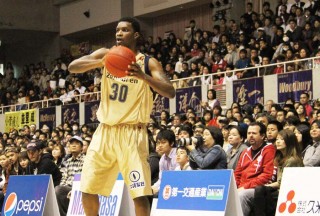 Terrance Woodbury (#30), together with Anthony McHenry, had a big part in crushing Chiba 89-59 in Sunday’s game. The Saturday match ended much narrower 84-82 for the Kings.

The wins continue to pile up for the high flying Ryukyu Golden Kings, who are only weeks away from the playoffs with the trophy as Western Conference Champions of the Basketball Japan League again within an arm’s length.

Playing on the road in Chiba, the Okinawa squad found excitement in its first clash with the Chiba Jets, going to the wire before 22-year-old Morihisa Yamauchi popped a pair of clean swish baskets in the final seconds to give the Golden Kings an 84-82 win.  Yamauchi sank the go-ahead three-pointer with less than a minute to play, only to be challenged by Chiba guard Kensuke Tanaka with a three-pointer of his own to tie the game at 82-82.

Yamauchi wasn’t finished though.  The second year player whipped of the go-ahead basket.  For the final breathtaking seconds, Okinawa battled to win, with Anthony McHenry knocking the ball away from Chiba with only four seconds on the clock.  Defense kept Okinawa ahead for the final ticks.  It probably shouldn’t have gone that way, statistically, as Chiba completed the evening with 52 rebounds to Okinawa’s 36.

Head coach Koto Toyama, only in his first year in the top spot, kept his team moving in a multitude of combinations, including a grueling ten minutes in the second stanza when he kept Terrance Woodbury and McHenry on the court the whole time.  “We were patient,” he said, “and we hustled at both ends of the court.”

It was a whole different ball game on Sunday, as the Golden Kings moved their record to 31-9 overall and 14-6 on the road.  The Chiba Jets couldn’t do anything right, losing 89-59. Terrance Woodbury picked up 15 points for Okinawa, while Narito Namizato finished with 14 points, 10 rebounds, nine assists and three steals.

The Toyama Grouses split their series with the Tokyo Cinq Reves, losing the first 90-83, only to bounce back with a 105-78 win on Sunday.  The expansion Tokyo squad is now 15-25.  The Osaka Evessa continues hot, sweeping its series with the Shinshu Brave Warriors.  They won their fifth straight game with 86-66 and 78-64 to move to 15-25.  That doesn’t sound like much until considering the Evessa was 5-19 before new head coach Bill Cartwright, formerly of the Chicago Bulls, moved to town.

The Kyoto Hannaryz lost to the Akita Northern Happinets 78-77 in a Saturday squeaker, only to find the shoe on the other foot Sunday.  The Happinets move to 21-19 on the season, an exact match with Kyoto.