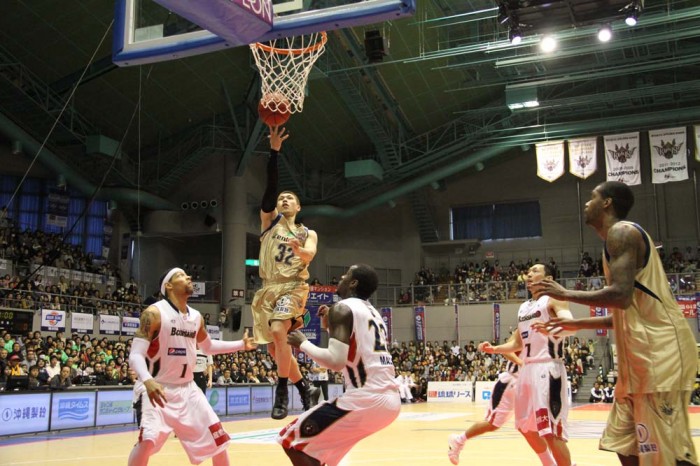 Morihisa Yamauchi (#32) is about to sink one in Sunday’s game.

The Yokohama B-Corsairs came to town looking to ruffle the Kings’ feathers, but couldn’t get any traction as Anthony McHenry dumped in 12 points while gathering 14 rebounds, three steals and two blocks in leading Okinawa to a 16thhome win against only three losses, 77-62.  Dzaflo Larkai was hot, going 7-for-8 and 18 points, while Shigeyuki Kinjo garnered 12 points and four steals in only 15 minutes on the court. Naoto Kosuge had 11, while Terrance Woodbury and Narito Namizato each had nine. 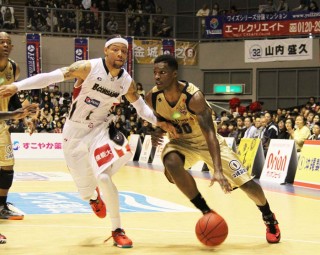 Terrance Woodbury made Sunday afternoon’s  contest exciting for the home fans, guiding the Golden Kings with 25 points, including four-of-six three-pointers, en route to the 75-58 thumping of the cross-conference rivals.  The Golden Kings stretch their Western Conference lead with a 28-8 record, while the B-Corsairs rule the Eastern Conference with a 25-11 record.

Although it was a weekend that has no bearing on the fast-approaching playoffs, the Saitama Broncos gathered a lot of media attention with first a 98-83 win over the host Osaka Evessa, and then a 103-96 overtime loss.  The significance?  Saitama’s now 8-28, an impressive rally with as many wins as last year’s full season record.  Osaka’s now in 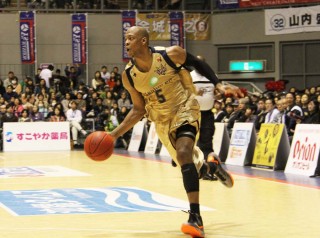 slightly better shape, 11-25 overall. The Shimane Susanoo Magic outlasted the Akita Northern Happinets 69-67in the first game of their series, only to lose Sunday, 76-66, ending a seven=-game win streak.  The Susanoo Magic are now 26-12, while Akita is 19-17.

The Shiga Lakestars pulled irons from the fire in both games against the Shinshu Brave Warriors, winning 88-67 and 106-101 in overtime.  The Lakestars are in playoff contention at 24-14, while the Brave Warriors are 16-22.  Fukuoka Rizing isn’t complaining about the weekend, beating the Crane Thunders 88-80 and 81-75.  The Rizing’s now 26-12, while Gunma falls to 9-29.  The Toyama Grouses hammered out an easy 78-56 win over the Miyazaki Shining Suns Saturday, then did it again to the lowly 5-33 Shining Suns Sunday, 75-59.

The Takamatsu Five Arrows struggled in overtime Saturday, losing 92-89 to the Iwate Big Bulls, but found luck on their side Sunday as they rallied for an 81-65 victory.  Itwate slips to 25-13, while the Five Arrows are 15-23.   The Tokyo Cinq Reves outlasted the Chiba Jets 91-78 in their first clash Saturday, then saw the Jets salvage a series split with an 89-80 win.  Chiba’s now 19-17 and Tokyo slides to 13-23.  The Oita HeatDevils split the weekend with the Niigata Albirex BB, winning the first match-up 86-78,  only to have Niigata bounce back Sunday with a 12-point 79-67 win.  The Albirex are now 27-11.