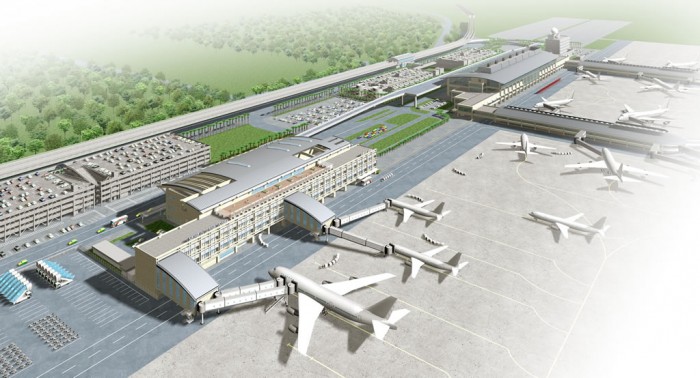 Construction of the new Naha International Air Terminal building is to be completed and open in January, and it’s hard to decide whether air travelers or the airlines serving Okinawa are more excited about the sprawling new facility.

The four-story terminal building is being built directly north of the existing, small and antiquated terminal building.  In much the same manner as the Domestic Terminal a few dozen meters to the south, the first floor will be an arrival lobby, the second floor a departure lounge, and the third floor designated for immigration and customs.  The fourth floor will be a spectator viewing lobby.

The new terminal will have air bridges to accommodate two large or four mid-size airliners.  Being built at a cost of ¥4.4 billion, the new building has a floor space of 9,240 square meters.  Totally state-of-the-art, the new terminal will be able to transfer baggage and cargo to and from the Domestic Terminal.  Officials say a corridor connecting the new international terminal and the existing domestic terminal will be constructed.

The Naha International Airport expansion program also includes a new runway.  Airport officials say the entire airport is being reorganized to accommodate travel growth in Okinawa.  The construction is said to be slightly ahead of projected timelines.