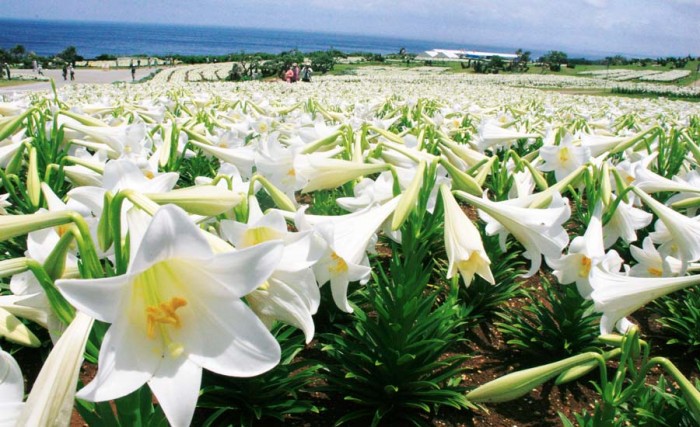 A million white lilies are in full bloom at the Ie Island Lily Park that opens for its two-week festival running through May 6.

The 18th annual Iejima Island Lily Festival in northern Okinawa is making final preparations for its opening on Saturday.

The free flower festival runs through Monday, May 6th, at Iejima Lily Field Park, in Ie Village.  The festival ends on Children’s Day in Japan. The Iejima Lily Field Park covered with snow-white lily flowers offers a magnificent view. A variety of events take place during the festival, including many music performances and village dances, folk songs and the Ryukyu classical music.  The music will be performed on Saturdays, Sundays, and during the Golden Week holidays.  During the period visitors can enjoy spring time fully, while lily flowers are fragrant. There’s also the experience of horseback riding at the park during the festival.

Iejima, known in English as Ie Shima during World War II, is an island lying a few kilometers off the Motobu Peninsula on Okinawa Island. The island measures 20 kilometers, 12 miles, in circumference and covers 23 square kilometers or 8.9 sq mi. The island has a population of 4,610 with most islanders living in Ie Village, which has a ferry connection with the town of Motobu. Iejima is generally flat. The most notable geographic feature is a 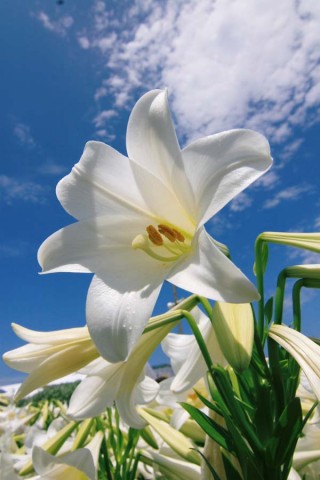 The air in Ie Island’s Lily Park is fragrant with the scent of lilies in bloom.

peak called Mount Gusuku. known locally as “Tacchu” that has a height of 172 meters. The mountain resembles a volcano but is actually an erosion artifact.

U.S. journalist Ernie Pyle died on Iejima during the Battle of Okinawa in World War II. There is a monument dedicated to his memory on the southern part of the island, where every year on the weekend closest to his death, April 1st, there is a memorial service.

Alternately called “Peanut Island,” for its general shape and peanut crop, or “Flower Island,” for its abundant flora and more sizeable crop of flowers, Iejima draws tourists by ferry, especially during late April when the Ie Lily Festival begins the season. The Youth Excursion Village accommodates campers for ¥400 a person and includes access to a good beach. The YYY Resort and Hotel located just east of the ferry port is available for those who do not wish to camp.

During the 30-minute ferry ride from Motobu on mainland Okinawa, Iejima reveals itself in stages. First, Mount Tacchu emerges above the waves like a chunk of the peanut brittle for which the island is renowned. Next, the wind-blown scent of countless thousands of hibiscuses sweetens the stink of the ship’s diesel engines. Finally, swaths of sugar cane come into view — followed by khaki-green tobacco fields and white sand beaches flanking the island’s southern shores.