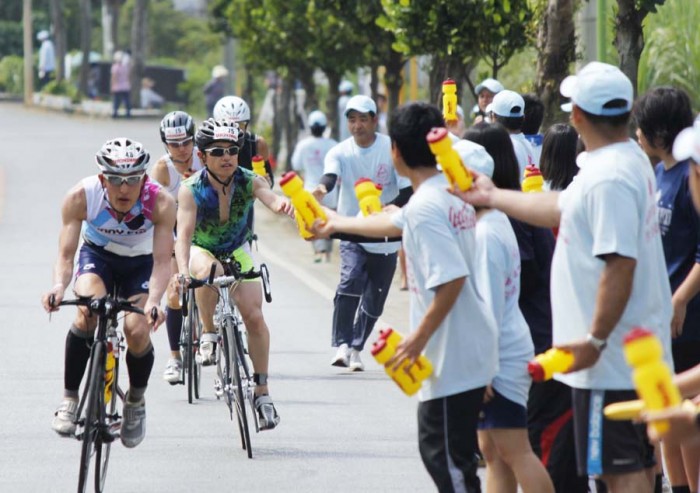 Crossing the goal line within the 13 and half hour time limit is an achievement in itself, and a worthy goal for most of the 1,500 or so participants who are accepted for the race. ©Miyakojima Triathlon Executive Committee

One the most famous in the triathlon conventions held in Japan, the 29th All Japan Triathlon, is putting the final touches on the course in preparation for the Sunday, April 21st event.

Many foreigners and Japanese TV entertainers participate every year, and a special edition TV 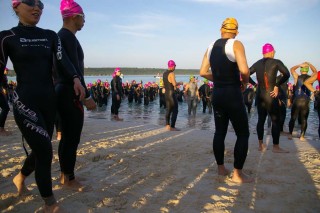 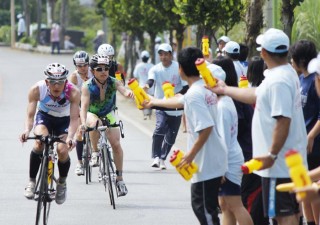 Local volunteers are cheering up the competitors all the way. ©Miyakojima Triathlon Executive Committee

program is often included.  The swimming course is the Maehama Beach, which with its white sands is said to be the most transparent sea in the East Asia.  Through the bicycle course, all athletes pedal 1½ times around Miyakojima, enjoying the strong sea breeze. All athletes then make a circuit around the central part of the island with its gradual ups and downs through the running course, ending at the Miyakojima City Track and Field Center.

The event kicks off at 7 a.m., and activities run through 8:30 p.m. on Miyakojima Island, sponsored by the Miyakojima Triathlon Committee.  The triathlon, which covers 200.195km, or 124.4 miles, allows 13 ½ hours for the anticipated 1,500 athletes to complete.

Miyako Island is the largest and the most populous island among the Miyako Islands of Okinawa Prefecture. Miyako-jima, as it’s know in Japanese, is administered as part of the City of Miyakojima, which includes not only Miyako-jima, but also five other populated islands. Miyako-jima lies approximately 300 kilometers, 190 miles, southwest of Okinawa Island and 400 kilometers, 250 miles, east of Taipei, Taiwan. With an area of 158.70 square kilometers, 61.27 sq miles, Miyako is the fourth-largest island in Okinawa Prefecture. The island is triangular in shape and is composed of Ryukyuan limestone. Miyako jima is subject to drought and is frequently struck by typhoons.

Miyako jima is well known for its beauty, particularly the Eastern Cape, which is considered by many as one of the most beautiful spots in Japan. Other notable locations include Maehama Beach, the German Cultural Center, Painagama Beach, and the sights on Irabu Island. There are two islands close by which are connected by bridges to Miyako, Ikema and Kurima. The Miyako language, one of several Ryukyuan languages, is spoken on Miyakojima.