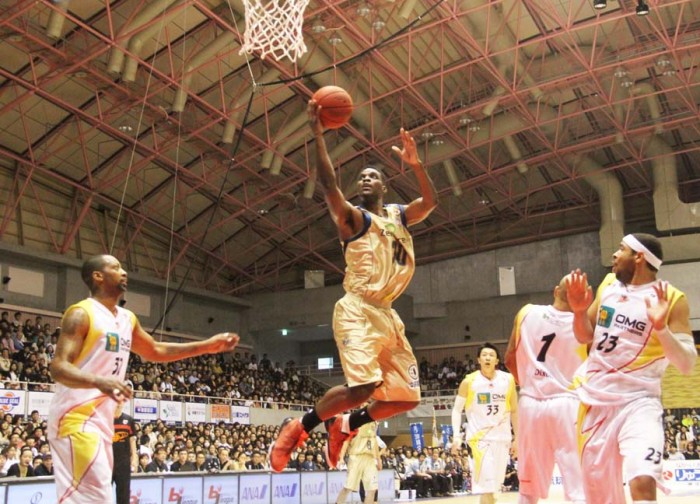 Terrance Woodbury was the high scorer of the team on both days tallying 30 points on Saturday and 28 more on Sunday.

With the season’s Western Conference championship already in the bag, the Ryukyu Golden Kings played relaxed in front of the home fans at Okinawa City, trashing the Gunma Crane Thunders twice over the weekend, using the games as a warm up for the coming playoffs.

Okinawa took the first game 96-63 after a few anxious moments that found them trailing the Crane Thunders 38-37 at the half.  It was all Golden Kings in the second half, with Narito Namizato picking up six of 16 steals, while Terrance Woodbury tallied 30 points for the game high.  Teammate Anthony McHenry was sharp himself, scoring 24 points, 13 rebounds, three blocks, two assists and two steals.  Naoto Kosuge added 14 and Dzaflo Larkai picked up 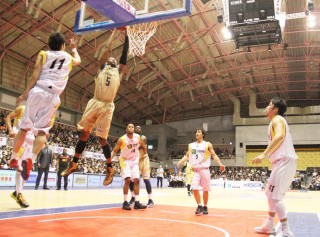 Sunday was a repeat of Saturday, with the Golden Kings rolling to a 98-72 victory over the 12-36 Gunma squad, boosting the season record to 38-10, with a home court scorecard of 24-3.  Terrance Woodbury again was the game’s high scorer, with 28 points, 11 rebounds and three steals, while Anthony McHenry was next with 18 points, 12 rebounds, four assists and three steals.  Dzaflo Larkai picked up 17 points and Naoto Kosuge brought in 13.

The fans were out in force to see the reigning league champions in action, with 3,530 in the arena Saturday and 3,701 on Sunday.  They witnessed coordinated defensive play that held Gunma’s point-getter, Jarmaine Dixon, to only 11 points Saturday and 10 on Sunday, compared with his usual 16.

The Toyama Grouses, tied for first place in the Eastern Conference, pulled off an 89-83 victory over the hot-shooting Yokohama B-Corsairs in the first game of their series.  They couldn’t hang on Sunday, though, losing to Yokohama 96-72.  The B-Corsairs are the ones tied with Toyama for first place in the conference.  Yokohama’s now 32-16 and Toyama is 32-16 as well.  They’re tied with the Niigata Albirex BB.  All three teams have four regular season games remaining.

The Osaka Evessa continue their winning ways with a pair of victories over the Oita HeatDevils, 88-77 and 107-94, to improve to 22-26.  The season started with Osaka I deep slump, having only  5-19 record before Bill Cartright took over as coach.  The Fukuoka Rizing outdid the Hamamatsu Higashimikawa Phoenix 69-58 and 60-51 to move their record to 33-17, good enough for a shot at the playoffs.  The Phoenix still has a chance with a 26-22 record.

The Kyoto Hannaryz trounced the Takamatsu Five Arrows 79-51 in their first encounter, and won again, 74-71, in the second stanza to run their record to 27-21 and a chance at the playoffs.  The Shiga Lakestars likewise swept their series, outdistancing the Miyazaki Shining Suns 78-75 and 77-68.  The Lakestars are in line for a playoff berth with a 30-18 record, while Miyazaki’s in the cellar at 9-41.