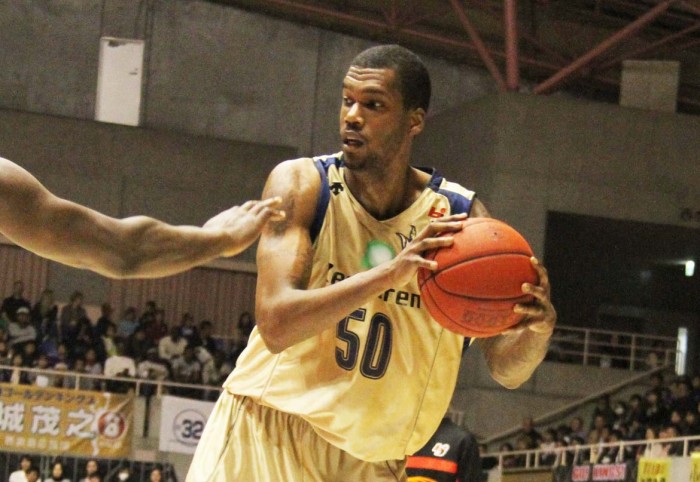 Jeff Newton returned to the court for weekend games after a month long hiatus after a knee injury followed by a surgery.

It was not even a level playing field as the Ryukyu Golden Kings–already the Western Conference Champions in the Basketball Japan League and with their eye on yet another league championship—showed little mercy in Tokyo as they whipped the Tokyo Cinq Reves 86-56 and 97-60 to run their season record to 40-10.

In the first tilt, Jeff Newton returned to the court after missing a month with a knee injury that required surgery.  The 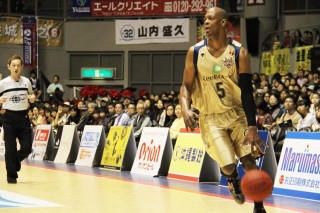 five-time title winner scored three points, eight rebounds, one assist and one block, but motivated his teammates.  Anthony McHenry led the squad with 21 points and 14 rebounds, and Terrance Woodbury picked up 19. Naoto Kosuge and Dzaflo Larkai both had 13, while Narito Namizato added seven assists for Okinawa.

Although nobody thought Sunday could be worse for Tokyo, it was.   Okinawa pressed on defense as if they were playing their closest rival instead of an inaugural season team that’s still trying to jell.  In the second and third quarters, Okinawa outscored Tokyo 52-20.  Tokyo’s now 17-33 on the year.

Terrance Woodbury was like a player possessed, racking up 29 points including going 13-for-18 inside the ark.  McHenry scored 16, plus hauled in a dozen rebounds and provided six assists and two steals.  Tokyo’s coach, Motofumi Aoki, praised his players for a spirited season, but was gracious in defeat, noting “Ryukyu is a great, talented team.”

The Shiga Lakestars split their series with the Akita Northern Happinets, winning the first 84-67, but failing to hold onto a lead in the second, losing 92-88.  Shiga, 31-19, shares a piece of the Eastern Conference lead, while Akita’s 25-25.  The Iwate Big Bulls, another of those teams in contention for the Eastern title, picked up a pair from the Miyazaki Shining Suns, 86-59 and 84-60, to move to 33-17 as the season ticks down.  Miyazaki has the dubious honor of the league’s worst record at 9-43.

The Saitama Broncos split their series with the Shimane Susanoo Magic, winning the first in a 100-98 squeaker, only to tumble 117-95 in the Sunday match up.  The Broncos are now 15-35, while the Susanoo Magic is 32-18 and contending for the Eastern Conference title.  The Oita HeatDevils outdistanced the Toyama Grouses 91-85 in their first hardwood battle in Beppu, Oita Prefecture, but the Grouses, who are still in contention for the Eastern Title, picked up an 86-78 win to push ahead with a 33-17 record.  The HeatDevils are not in contention with a 21-30 record.

The Chiba Jets challenged yet another of the contenders for the Eastern Conference title, scoring a 74-67 win Saturday before falling 104-79 on Sunday to the Yokohama B-Corsairs.  Yokohama’s now 33-17, the same as Toyama and Iwate.  Chiba’s out of the race with a 25-24 record.  The Niigata Albirex BB swept a two-game season from the Osaka Evessa to push the record to 34-16.  With Sunday’s 79-74 win, Niigata claimed the top spot in the Eastern Conference, just ahead of the other three teams.

The Hamamatsu Higashimikawa Phoenix scored a road victory over the Gunma Crane Thunders, 97-87, Saturday, but the lowly Gunma squad kicked back with a 76-73 win Sunday to improve to 12-37.  The Phoenix are now 27-23.  The Sendai 89ers split their series with the Shinshu Brave Warriors, winning the first 81-79, and losing the second, 83-80.  Neither the 89ers with a 20-30 record, or the Brave Warriors at 17-33, are in playoffs contention.

Tickets for the Ryukyu Golden Kings’ play-off matches will be available at Famiport vending machines in FamilyMart stores and ePlus ticket vending system on the internet starting 10 a.m. on Apr. 29.