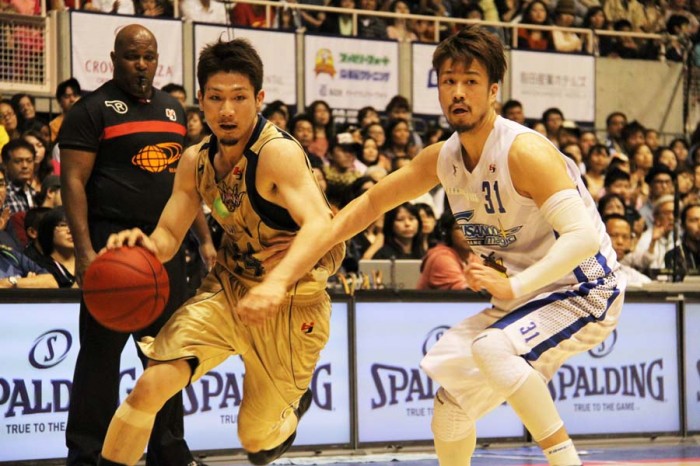 Sporting the best record in the Basketball Japan League, the Ryukyu Golden Kings proved why in front of the home fans in Okinawa City, finally smashing the Shimane Susanoo Magic twice over the weekend. Previously, Shimane had beaten the Kings four times in a row, and winning the weekend matches was critical both psychologically and for the team’s stated goal of winning the second consecutive championship of the bj-Leagua, 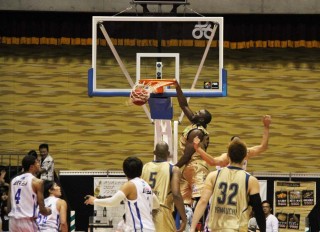 Dzaflo Larkai sinks in one more in Sunday’s game as Susanoo Magic players can only watch. Kings won the game 90-76.

streak to 21 of 24 games.  Oddly, the Golden Kings trailed 27-26 at the half as they played before a record crowd of 3,710.   Terrance Woodbury was the big man with 20 points, while Anthony McHenry had 19, plus 16 rebounds and three blocked shots.  Dzaflo Larkai dumped in 16 while picking up a dozen rebounds, and Narito Namizato aided the cause with nine points, six assists and two steals.

The Kings kept on rolling Sunday, with Anthony McHenry tallying the game high 25 points, while adding nine rebounds and four assists.  Dzaflo Larkai was right behind with 23. Terrance Woodbury contributed 22 points, while rookie guard Ryuichi Kishimoto, only 22 and playing his 13th game with the Golden Kings, popped in nine.  The Susanoo Magic are now 30-16.

The two wins were the more sweeter for the Kings as their ace player Jeff Newton had to stay off the court on both days because of an injury. 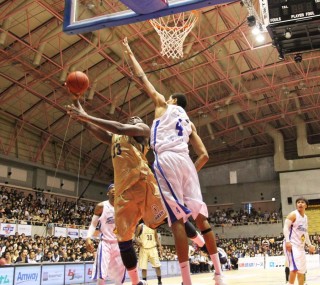 Dzaflo Larkai (#33) put in a day’s work at Susanoo Magic’s end of the court.

The Fukuoka Rizing dampened the Yokohama B-Corsairs weekend, taking a pair of wins at Yokosuka.  The Rizing won 106-97 in overtime Saturday, then bounced back to keep the pressure on with a 67-66 win Sunday.  The Rizing has the second best record in the Western Conference together with the Susanoo Magic at 30-16, while the B-Corsairs at 30-14 remain tied with the Niigata Albirex in the Eastern Conference.

The Oita HeatDevils were equally successful over the weekend, eeking out a 102-101 win over the Saitahome fans motivating as thema Broncos Saturday, and then needing overtime to do it again 100-98  on Sunday.  Great basketball, but not impacting the standings as the HeatDevils are 18-28 and Saitama’s 11-33.  Also in the double-win column was the kGunma Crane Thunders, who outpaced the Niigata Albirex BB 100-95 and 88-80.  Gunma’s wins improved their record to 12-31, stunning the 30-14 Albirex BB.