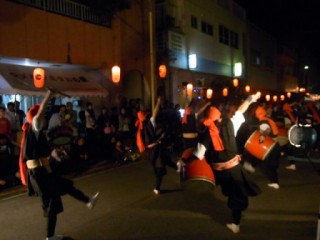 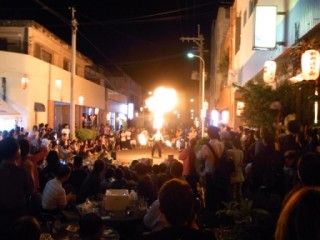 Many street performers show their skills. 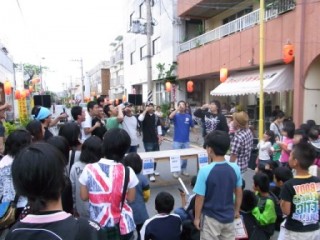 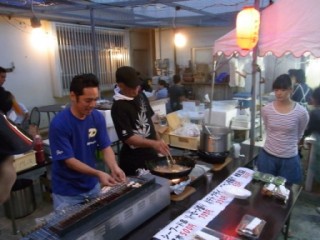 This festival is the local event of the year for Kume island. Organizers say that “Even if you do not participate in this local event, it is also fully worthy that you visit this island as a tourist because many rare creatures inhabit this island surrounded by much rich nature.”  The festival is free.

The Kume Island Firefly is exceptionally distributed with Luciola cruciata as a firefly of an aquatic life of a larva. Zatosawa Snakes, which are the only freshwater snakes in Japan, call Kume Island home. Every year, many tourists and divers visit from all over Japan, known for its great diving spots. Since accommodations, such as hotels, are also ready, it is the optimal island for going out by an overnight trip from a main Okinawa island.

The festival program starts with a quick drink contest of coca cola and beer, Face Paint on Kids—using water paint—is at 6 p.m., followed by a brass band performance at 6:20 p.m., a sanshin show at 7 p.m., a street performance at 7:30 p.m. and acoustic music live at 8:10 p.m.  Shima Uta, Song of Island, closes the festival with a performance at 8:50 p.m.

To get to Kume Island you can either take a twice a day ferry from Tomari Port in Naha, of one of the several daily flights from Naha Airport.Tidbits on Kume Island

Kume Island is an island, part of the Okinawa Islands and administratively part of the town of Kumejima, Okinawa Prefecture. It has an elevation of 59.11 meters (193.9 ft). The island had a population of 8,713, as of 2010. Kume Island is a volcanic island. Its principal economic activities are the production of sugarcane and tourism.

It is well known for its textiles, called Kumejima-tsumugi, which are designated an Important Intangible Cultural Property. The town is also known for its Kumesen Awamori and deepsea water. Historically due to Kumejima’s abundance of fresh water, rice was once extensively cultivated. Recently however Kumejima’s main industry is sugar cane (sato-kibi) and tourism.

Kumejima is often said to be one of the most beautiful of the Okinawa Islands. During the time of the Ryukyu Kingdom, Kumejima was often visited by Chinese envoys called “sapposhi” on their way to Shuri Castle on Okinawa Island. When the Ryukyu kingdom was abolished by Japan, many noble families were moved from Shuri to Kumejima.

Uezu House is a traditional Ryukyu Governor’s house dating back hundreds of years. The walled grounds contain gardens, a main house, and outlying buildings. The house is a quiet and peaceful look back into the history of Okinawa. In order to maintain and preserve the historic estate, there is a ¥300 entry fee for adults, payable at the house. If an attendant is not available, it is customary to leave the amount in a tray.