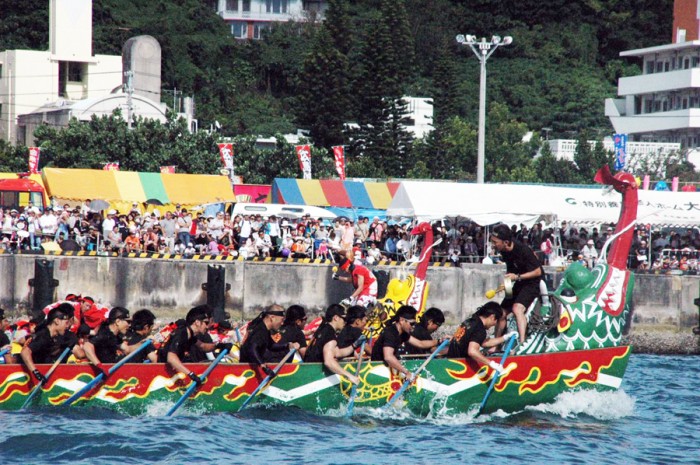 Powered by crews of up to 40 rowers the boats race the 4 x 100-meter long Naha Haarii course.

The best known of Okinawa’s dragon boat races are coming up May 3rd ~ 5th as the cornerstone of the Naha Haarii Festival at Naha Aja Port Wharf. 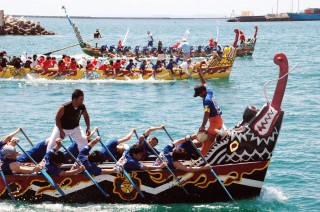 Festivities all three days are free, and open to the public, 10 a.m. ~ 9 p.m., with everything from live entertainment to food and drinks vendors to souvenir stands.

Haarii is an Okinawan dragon boat race and festival that celebrates and prays for good catches and marine safety. Naha Haarii is the largest among all of the Haarii events held in Okinawa. Haarii boat races to be carried out in each area of Okinawa are performed generally on “yukkanuhi,” May 4th of the lunar calendar, but organizers want tourists to watch the Naha Haarii so it is performed during Golden Week and from May 3rd to May 5th of the solar calendar. 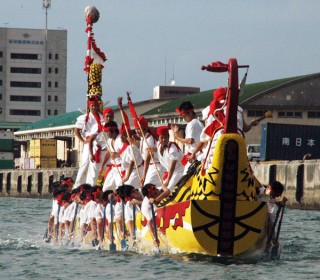 Prior to each heat the crews row slowly around the port in front of spectators.

Besides Haarii boat races, there will be various events including a comedy stage, live music performances and even a sumo contest for youngsters.

Naha Haarii’s origins can be traced to China from where it came to Okinawa in the 14th century. A legend has it that a Ryukyuan prince who saw the “Haryu Ship” races in Nanjing, China, while studying there, had a race boat copy made after coming back to Okinawa. Villages in other parts of the island made their own boats and the races prospered as a national event of Ryukyu Kingdom. The custom was abolished when the Ryukyu Kingdom was taken over as a Japanese Prefecture in 1879. Although the race was temporarily revived the games finally stopped in 1928. The event was again permanently revived after World War II.

The greatest difference between Naha Haarii and Haarii of other areas within the prefecture is the size of boats. Although the crew of the Haarii boat elsewhere is about 11 persons, the boats of Naha are larger with crews of some 40 people.

A ceremony and a final race will be performed on the Naha Haarii’s last day. It begins with a ceremony, while the crew who wore the clothes of Haarii performs ancient rite and sing Haarii songs, and row their ships slowly and confidently around the port showing off for spectators before the race.

On Saturday, a “General Haarii experience boarding” is permitted, in which anyone can participate. Since this event is very popular, it will be crowded. Participation is free, but those wanting to get onboard need to gather at the receptionist station at 10:30 a.m. Children under school age cannot participate.

Maps and other festival information are available in English at http://www.naha-navi.or.jp/nahahari.html.