Taiwan to pass on Senkakus in fisheries talks 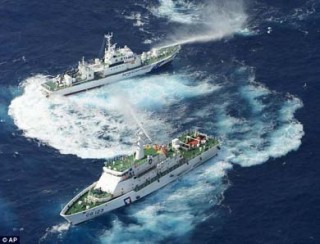 Taiwanese and Japanese coast guard boats have engaged in several skirmishes with water cannons in the disputed Senkaku area,

Taiwan’s taken a step away from the Senkakus dispute, announcing plans not to bring up its right to claims to the Senkaku Islands.

The move is considered a major policy shift by Taiwan, as negotiations begin for a fisheries agreement with Japan.  Officials say it’s too early to see if this really removes a barrier in the fisheries talks, or whether it will aid an agreement.  Both Taiwan and Japan claim fishing rights in the same waters between Okinawa and Taiwan.

Fishermen are calling for a rapid resolution, because the conflict is impacting their fishing.  Since Japan took over state ownership of three Senkaku Islands last year, tension in the region has grown.  Taiwan claims the five uninhabited islands, calling them Diaoyutai.  China also claims the islands, as does Japan, which administers them.  Japan insists there is not territorial dispute.

Taiwan’s President Ma Ying-jeou had said last fall he would push Japan to concede the dispute actually exists over sovereignty, and wanted it so stated in the fisheries agreement.  Ma wants the fishing rights to waters north of the Yaeyama Islands.  Fishermen are eager to catch the tuna, and say they don’t care about the Senkaku Islands.