One of the most famous and traditional meat stores in Okinawa, Uehara Meat established in 1955 inside Makishi Public Market, is expanding its operations across the island.

Uehara Meat was established inside of Makishi public market as one small retail shop. It’s becoming larger thanks to second generation president Hiroaki Uehara, who began wholesale meat sales, even from mainland Japan.  The business continues to grow, and now they do manufacturing service, including production and storage management , after building a new factory with offices and moving to the Toyosaki area in Tomigusuku city in 2012. Its one of the big success stories in Okinawa.

Zenshi Uehara, the founder of Uehara Meat and first president of the company, started the 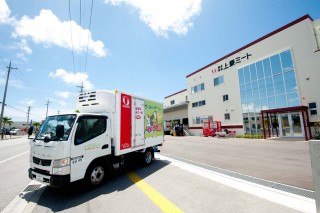 small butcher shop at Makishi Public Market in Naha 10 years after the end of World War II, purchasing farm animals and cutting and washing them by himself for sale. That was okay at that time, but not practical now. He worked harder and harder because he could get money as much as he worked at that time.

As the second president took over the business, he changed the style of business because he thought it didn’t generate enough money as just a butcher shop because times are changing. He thought how he could get farm animals as cheaply as possible as while selling at regular prices, looking around farms in Okinawa.  Most farmers had already contracted with other companies or other butchers, and he could not get their animals.

He jumped to mainland Japan, and says that two weeks of roaming the countryside changed his life, although at first the farmers were reluctant and refused him. They didn’t know him, if he was safe or not, and whether he had money. Some moved by his active style, signed contracts. After that, his style increased his company’s business, and that changed his company style, and allowed him to start the wholesale business.

Uehara Meat ran its business well at Minatomachi, Naha, from the 1980’s to 2011, but Hiroaki wasn’t satisfied with his business, thinking he needed to challenge operations in a new way.  Once he thought what he could do and what he should do, the answer was production. Until last year, his company only ran the butcher shop and wholesale  production from Okinawa Island, mainland Japan or foreign countries to retail shops. He thought if we could increase production, “we can serve good food with better prices, and we can provide food retailers request.”  That’s when he decided to built the factory with offices and huge storage rooms installed to the Toyosaki area.

Now, they run their business more as a community-based style. Sometime they invite kids or even adults to backyard tours, where they have an event called “Kaitai show” that shows how to break down animals. They say its kind of a study event, as most people don’t know about what they eat, which part as a food.  “We want people to know meat details and life importance from the event,” Uehara says, noting customers can purchase meats cheaper at the events. The events are held around the 29th of every month at Farmers Market Itoman or Farmers Market Agarihama Nichihara town because Japanese call meat “Niku” and 2 can read “ni” and 9 can read “ku”.  All schedules about the event are announced at their website http://www.u-meat.net/news/

This weekend, on the 21st, they have their 1st anniversary of the new factory special event to show customer appreciation at the factory in Toyosaki. You can purchase Okinawa original famous brand Ishigaki island beef “Ishigaki Gyu” at special prices, as well as special Okinawan brand pork “Agu”, and chicken or sausage or shrimp at really low prices. They say the event is show for customers “ we don’t think sales by this event. We can do business because we have customers, and this is a profit reduction event. One more special present to customers, to the first 1,000 customers for the event, can get Pork miso soup “Agu ton-jiru” for free! There are JA fresh vegetable booth or food stalls too.

For those not wanting to face the crowds, customers can go to the Uehara Meat packing production at Uehara Meat direct retail shop at Mashiki public market, Nouren Ichiba branch, Ham Koubou at Matsuo Naha, Farmers Market Itoman, Agarihama, Toyosaki, or Big1 Miebashi branch.  Processed products are available at. most supermarkets or grocery stores in Okinawa. Uehara Meat has shopping available on the internet, too