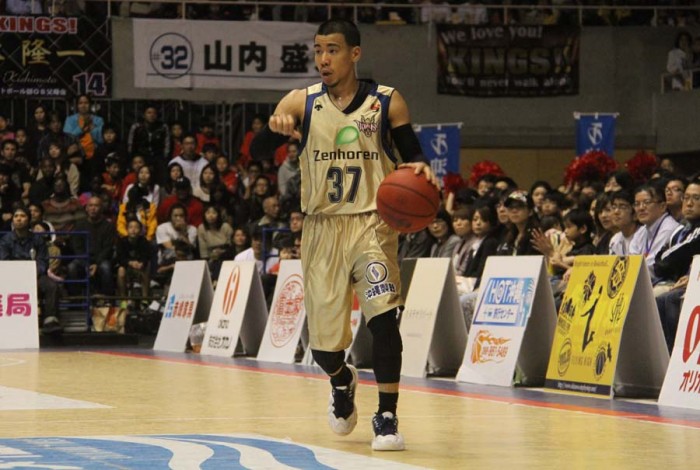 Point guard Narito Namizato, who has averaged the second highest in assista in the league this season, still has his work cut for him this weekend against Kyoto Hannaryz.

The Golden Week first round of the Basketball Japan League playoffs was one of monumental achievements for teams, but Okinawa eyes were on the Kyoto Hannaryz, expected to win over the Shiga Lakestars, and they were right; Kyoto’s on the plane today for the trip to Okinawa and a weekend with the reigning league champion Ryukyu Golden Kings.

The Golden Kings, by virtue of winning the Western Conference championship and holding the league’s best record at 42-10, is the top seeded team in the league and had a bye for the first round.  The Kyoto Hannaryz will take on Okinawa Saturday and Sunday.

For the other playoff teams, it was a weekend of excitement at every venue, with some notable feats.  The Shimane Susanoo Magic won its playoff series, its first in franchise history, by beating the Hamamatsu Higashimikawa Phoenix, a powerhouse in the Eastern Conference over the years.  The Iwate Big Bulls also scored their first ever playoffs victory, and the Toyama Grouses finally licked the 0-4 curse of past playoffs to win their way to the second round.

Kyoto outlasted the Shiga Lakestars with an 89-75 win Sunday to take a two-game sweep, holding the lead in all four quarters.  David Palmer, who last year was on the Ryukyu Golden Kings squad that won the league championship, was at his best Sunday, scoring 23 points, including going 14-for-15 from the charity stripe.  Palmer is the league’s best at the free throw line, scoring 89.5% of the time.  This weekend’s semi-finals pits him against his old teammates in Okinawa.

The Toyama Grouses, who won the first match against the Chiba Jets Saturday, lost the second game Sunday, 103-73, sending the series to a third game mini-tiebreaker and a 19-17 win that propelled them to the semi-finals.  They’ll meet the Yokohama B-Corsairs in Eastern Conference action

The storyline was the same for the Akita Northern Happinets, who lost the opener to the Iwate Big Bulls, then won a squeaker 72-71 to send the series to a mini-tiebreaker, which it won 25-24.  Notable was the fact the two Northern Happinets victories were by a combined total of two points.  The Northern Happinets, with a 28—27 record, will face the Niigata Albirex BB, the Eastern Conference champion, this weekend in Niigata.

The Shimane Susanoo Magic almost made it look easy against the Hamamatsu Higashimikawa Phoenix, winning the series with an 82-73 score Saturday.  Shimane, now 35-19, heads to Fukuoka to go against the number two seed, Rizing Fukuoka and its 34-18 record, Saturday and Sunday.  Shimane is 35-19.  Fukuoka had a first round by last weekend.